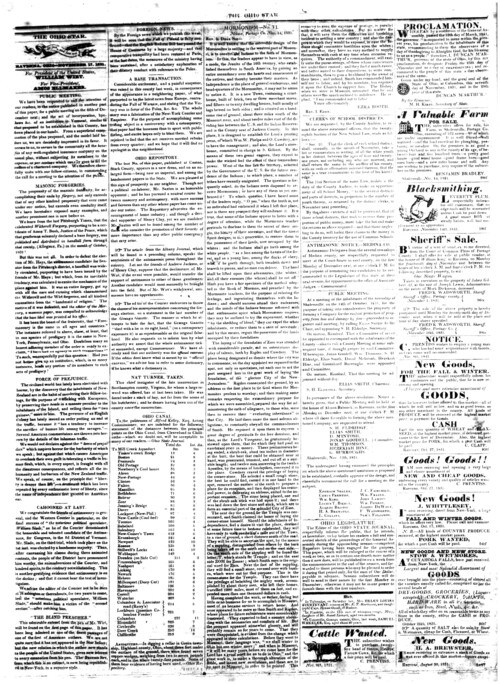 It is well known that the ostensible design of the Mormonites in settling in the western part of Missouri, is to convert the Indians to the faith of Mormonism. In this, the leaders appear to have in view, as a mode, the Jesuits of the 16th century, who established themselves in South America, by gaining an entire ascendancy over the hearts and consciences of the natives, and thereby became their masters. As Independence is the place of general rendezvous, and head-quarters of the Mormonites, it may not be amiss to notice it. It is a new Town, containing a courthouse, built of brick, two or three merchant stores, and fifteen or twenty dwelling houses, built mostly of logs hewed on both sides; and is situated on a handsome rise of ground, about three miles south of the Missouri river, and about twelve miles east of the dividing line between the U. S. and the Indian Reserves and is the County seat of Jackson County. In this place, it is designed to establish the Lord’s printing press, of which Wm. W. Phelps and O. Cowdery, are to have the management; and also, the Lord’s storehouse, committed in charge to S. Gilbert. By the means of these two grand engines, they expect to make the wicked feel the effect of their tremendous power. West of the line lies the territory, selected by the Government of the U.S. for the future residence of the Indians; to which place, a number of tribes have recently emigrated.

The question is frequently asked, do the Indians seem disposed to receive Mormonism; or have any of them as yet embraced it? To which question, I have heard some of the leaders reply, “O yes,” when the truth is, not an individual had embraced it when I left that place, nor is there any prospect they will embrace it. It is true, that some of the Indians appear to listen with a degree of attention, while the Mormonite teacher pretends to disclose to them the secret of their origin, the history of their ancestors, and that the Great Spirit designs, in this generation, to restore them to the possession of their lands, now occupied by the whites; and the Indians shall go forth among the white people, “as a lion among the beasts of the forest, and as a young lion, among the flocks of sheep, who, if he goeth through, both treadeth down and teareth to pieces, and no man can deliver. Thy hand shall be lifted upon their adversaries, (the whites,) and all their enemies (the whites) shall be cut off.” Here you have a fair specimen of the method adopted in the Book of Mormon, and preached by the Mormonite teachers, for the purpose of enlisting the feelings, and ingratiating themselves with the Indians; and should success attend their endeavors; and the minds of the Indians become inflamed with that enthusiastic spirit which Mormonism inspires, they may be inclined to try the experiment, whether “by the shedding of blood,” they can expel the white inhabitants, or reduce them to a state of servitude; and by this means, regain the possession of the lands occupied by their forefathers.

The laying of the foundation of Zion was attended with considerable parade, and an ostentatious display of talents, both by Rigdon and Cowdery. The place being designated as the site where the city was to commence, on the day appointed we repaired to the spot, not only as spectators, but each one to act the part assigned him in the great work of laying the foundation, of the “glorious City of the New-Jerusalem.” Rigdon consecrated the ground, by an address in the first place to the God whom the Mormonites profess to worship; and then making some remarks respecting the extraordinary purpose for which we were assembled, prepared the way for administering the oath of allegiance, to those who, were then to receive their “everlasting inheritance” in that City. He laid them under the most solemn obligations, to constantly obey all the commandments of Smith. He enjoined it upon them to express a great degree of gratitude for the free donation, and then, as the Lord’s Vicegerent, he gratuitously bestowed upon them, that for which they had paid an exorbitant price in money. These preliminaries being ended, a shrub oak, about ten inches in diameter at the butt, the best that could be obtained near at hand, was prostrated, trimmed, and cut off at a suitable length; and twelve men, answering to the twelve Apostles, by the means of handspikes, conveyed it to the place. Cowdery craved the privilege of laying the corner-stone. He selected a small rough stone, the best he could find, carried it in one hand to the spot, removed the surface of the earth to prepare a place for its reception, and then displayed his oratorical power, in delivering an address, suited to the important occasion. The stone being placed, one end of the shrub oak stick was laid upon it; and there was laid down the first stone and stick, which are to form an essential part of the splendid City of Zion.

The next day the ground for the Temple was consecrated, and Smith claimed the honor of laying the corner-stone himself. Should the inhabitants of Independence, feel a desire to visit the place, destined at some future time to become celebrated, they will have only to walk one half of a mile out of the Town, to a rise of ground, a short distance south of the road. They will be able to ascertain the spot, by the means of a sappling, distinguished from others by the bark being taken off on the north and on the east side.—On the south side of the sappling will be found the letter, T. which stands for Temple; and on the east side ZOM for Zomar; which Smith says is the original word for Zion. Near the foot of the sappling, they will find a small stone, covered over with bushes, which were cut for that purpose. This is the corner-stone for the Temple. They can there have the privilege of beholding the mighty work, accomplished by about thirty men, who left their homes, travelled 1000 miles, most of them on foot, and expended more than one thousand dollars in cash.

Having completed the work, or rather, finding but little or no business for us to accomplish in Missouri, most of us became anxious to return home. And none appeared to be more so than Smith and Rigdon, whose plans for future subsistence were considerably frustrated.

They expected to find a country abounding with the necessaries and comforts of life. But the prospect appeared somewhat gloomy, and will probably remain so for years to come. That they were disappointed, is evident from the change which appeared in their calculations. Before they went to Missouri, their language was, “we shall winter in Ohio but one winter more;” and when in Missouri, “it will be many years before we come here for the Lord has a great work for us to do in Ohio,” and the great work is, to make a thorough alteration of the Bible, and invent new revelations, and these are to be sent to Missouri, in order to be printed. This economy to save the expense of postage, is parallel with their other calculations. But no matter for that, it will save them the difficulties and hardships incident to settling a new country; and also the dangers to which they would be exposed, in case the Indians should commence hostilities upon the whites; and moreover, they have an easy method to supply themselves with cash at any time when occasion requires. The authority of a commandment, will easily untie the purse-strings, of those whose consciences are under their control; and they find it much easier, and better suited to their dispositions, to write commandments, than to gain a livelihood by the sweat of their brow; and indeed, Smith has commanded himself not to labor, and by his mandate, has enjoined it upon the Church to support him. The Bishop, when we were in Missouri, intimated, that he and others were too much inclined to indolence. He replied, “I am commanded not to labor.”