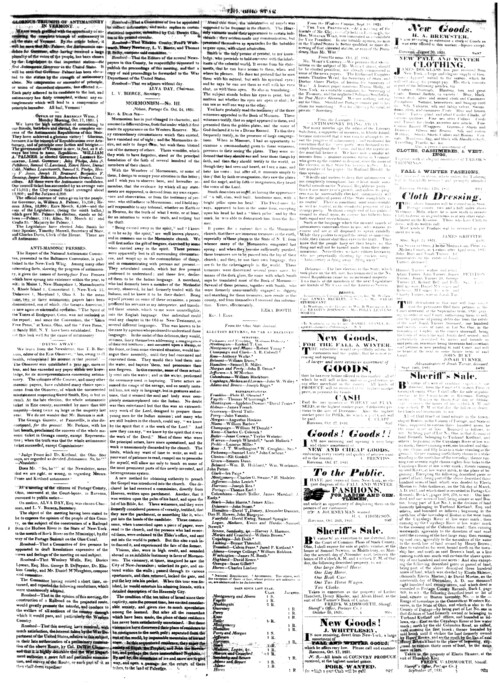 Mormonism has in part changed its character, and assumed a different dress, from that under which it first made its appearance on the Western Reserve. Many extraordinary circumstances which then existed, have vanished out of sight; and the Mormonites desire, not only to forget them, but wish them blotted out of the memory of others. Those wonders, which they wish to have forgotten, stand as the principal foundation of the faith of several hundred of the members of their church.

With the Wonders of Mormonism, or some of them, I design to occupy your attention in this letter; and I wish you to observe here, and hereafter remember, that the evidence by which all my statements are supported, is derived from my own experience and observation, or from the testimony of persons, who still adhere to Mormonism; and I hold myself responsible to any tribunal, whether on Earth or in Heaven, for the truth of what I write, or at least, for an intention to write the truth, and nothing but the truth.

“Being carried away in the spirit,” and “I know it to be so by the spirit,” are well known phrases, and in common use in the Mormonite church. We will first notice the gift of tongues, exercised by some when carried away in the spirit. These persons were apparently lost to all surrounding circumstances, and wrapt up in the contemplation of things, and in communicating with persons not present.—They articulated sounds, which but few present professed to understand; and those few, declared them to be the Indian language. A merchant, who had formerly been a member of the Methodist society, observed, he had formerly traded with the Indians, and he knew it to be their dialect. Being myself present on some of these occasions, a person proffered his services as my interpreter, and translated these sounds, which to me were unintelligible, into the English language. One individual could read any chapter in the Old or New-Testament, in several different languages. This was known to be the case by a person who professed to understand those languages. In the midst of this delirium, they would, at times, fancy themselves addressing a congregation of their red brethren; and mounted upon a stump, or the fence, or from some elevated situation, would harangue their assembly, until they had convinced and converted them. They would then lead them into the water, and baptize them, and pronounce their sins forgiven. In this exercise, some of them actually went into the water; and in the water, performed the ceremony used in baptizing. These actors assumed the visage of the savage, and so nearly imitated him, not only in language, but in gestures and actions, that it seemed the soul and body were completely metamorphosed into the Indian. No doubt was then entertained but that this was an extraordinary work of the Lord, designed to prepare those young men for the Indian mission; and many who are still leaders in the church, could say, “we know by the spirit that it is the work of the Lord.” And now they can say, “we know by the spirit that it is the work of the Devil.” Most of those who were the principal actors, have since apostatized, and the work is unanimously discarded by the church. The limits, which my want of time to write, as well as your want of patience to read, compel me to prescribe for myself, will allow me only to touch on some of the most prominent parts of this newly-invented, and heterogeneous system.

A new method for obtaining authority to preach the Gospel was introduced into the church. One declared he had received a commission, directly from Heeven, written upon parchment. Another, that it was written upon the palm of his hand, and upon the lid of his Bible, &c. Three witnesses, and they were formerly considered persons of veracity, testified, that they saw the parchment, or something like it, when put into the hands of the candidate. These commissions, when transcribed upon a piece of paper, were read to the church, and the persons who had received them, were ordained to the Elder’s office, and sent out into the world to preach. But this also sunk into discredit, and experienced the fate of the former.

Visions, also, were in high credit, and sounded abroad as an infallible testimony in favor of Mormonism. The visionary, at times, imagined he saw the City of New-Jerusalem; unlocked its gate, and entered within the walls; passed through its various apartments, and then returned, locked the gate, and put the key into his pocket. When this tour was finished, he would entertain his admiring friends, with a detailed description of the Heavenly City.

The condition of the ten tribes of Israel since their captivity, unto the present time, has excited considerable anxiety, and given rise to much speculation among the learned. But after all the researches which have been made, the place of their residence has never been satisfactorily ascertained. But these visionaries have discovered their place of residence to be contiguous to the north pole; separated from the rest of the world, by impassable mountains of ice and snow. In this sequestered residence, they enjoy the society of Elijah the Prophet, and John the Revelator, and perhaps the three immortalized Nephites.—By and by, the mountains of ice and snow are to give way, and open a passage for the return of these tribes, to the land of Palestine.

About this time, the ministration of angels was supposed to be frequent in the church.

The Heavenly visitants made their appearance to certain individuals: they seldom made any communication, but presented themselves as spectacles for the beholder to gaze upon, with silent admiration.

Smith is the only person at present, to my knowledge, who pretends to hold converse with the inhabitants of the celestial world. It seems from his statements, that he can have access to them, when and where he pleases. He does not pretend that he sees them with his natural, but with his spiritual eyes; and he says he can see them as well with his eyes shut, as with them open.

So also in translating.—The subject stands before his eyes in print, but it matters not whether his eyes are open or shut; he can see as well one way as the other.

You have probably read the testimony of the three witnesses appended to the Book of Mormon. These witnesses testify, that an angel appeared to them, and presented them the golden plates, and the voice of God declared it to be a Divine Record. To this they frequently testify, in the presence of large congregations. When in Missouri, I had an opportunity to examine a commandment given to these witnesses, previous to their seeing the plates. They were informed that they should see and hear those things by faith, and then they should testify to the world, as though they had seen and heard, as I see a man, and hear his voice: but after all, it amounts simply to this; that by faith or imagination, they saw the plates and the angel, and by faith or imagination, they heard the voice of the Lord.

Smith describes an angel, as having the appearance of “a tall, slim, well built, handsome man, with a bright pillar upon his head.” The Devil once, he says, appeared to him in the same form, excepting upon his head he had a “black pillar,” and by this mark, he was able to distinguish him from the former.

It passes for a current fact in the Mormonite church, that there are immense treasures in the earth, especially in those places in the State of N. Y. from whence many of the Mormonites emigrated last spring: and when they become sufficiently purified, these treasures are to be poured into the lap of their church; and then, to use their own language, they are to be the richest people in the world. These treasures were discovered several years since, by means of the dark glass, the same with which Smith says he translated most of the Book of Mormon.—Several of those persons, together with Smith, who were formerly unsuccessfully engaged in digging and searching for these treasures, now reside in this county, and from themselves I received this information. Yours, affectionately.