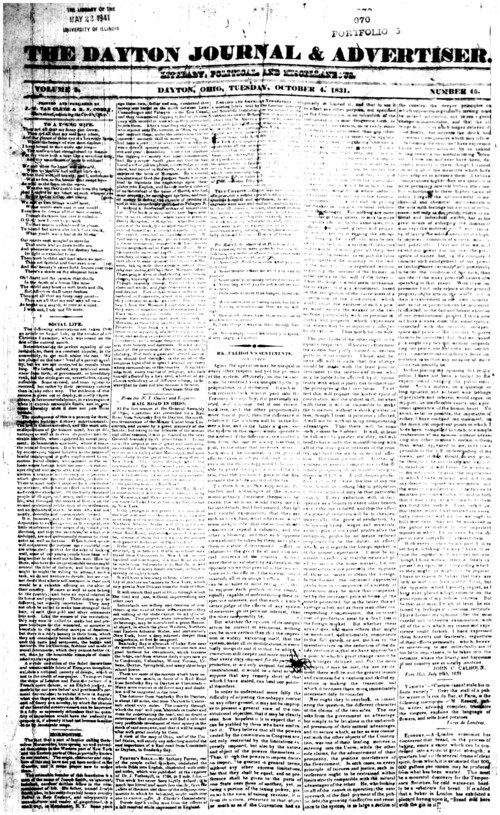 The fact that a sect of fanatics calling themselves Mormonites, have sprung up and extended themselves in the Western part of New York and the Eastern parts of Ohio, is partially known to our reader. The origin, character and members of this sect have not yet been notice in the Gazette, and it seems proper now to notice them.

The ostensible founder of this fanaticism is a man of the name Smith, an ignorant, indolent, careless shiftless fellow in the commencement of life. His father, named Joseph Smith, also, in his early days had been a country pedlar in New England, and subsequently a manufacturer and vendor of gingerbread, in a small way, in Manchester, N.Y. Some years ago these two, father and son, conceived that money was buried in the earth between Lake Canandaigua ad Palmyra on the Erie Canal, and commenced digging to find it, in company with several persons whom they persuaded to join them. After a time they engaged a man who resided near Paynesville, in Ohio, to assist and instruct them, under the persuasion that he possessed eminent skill in money finding. He had been a preacher of several sect in religion, was a shrewd cunning man, of considerable talent and great plausibility. Under his direction the digging for money was again commenced, and the younger Smith gave out that he had found a set of golden plates, concealed in an iron chest, and buried in the earth, upon which was engraved the book of Mormon. By a special inspiration from God the younger Smith was enabled to translate the engravings upon these plates into English, and having made a convert of an individual of the name of Harris, who had some property, he mortgaged his farm, and raised money to defray the expense of printing it, and it was accordingly published in Palmyra, N.Y. making a duodecimo volume of respectable size. The book is supposed to have been written by an ex-preacher, whose name is giving as Henry Rangdon, or Ringdon. After the publication of the book, the younger Smith began to exhibit himself as a prophet divinely inspired. He prayed, preached, and made converts. He “put money in his purse, ” and in consequence of a divine revelation, removed with his converts to the neighborhood of Painesville, Ohio. Here his converts increased rapidly; and recently a company of about one hundred emigrated from that place to some promised land upon the Missouri, taking with them their common means, their religious instructors, and their Mormon bibles. These people were of the laboring and farming classes, appeared to be decent and respectable. Though coarsely dressed, their clothes were clean and whole, and their demeanor was quiet and devout. Part of them remain in the neighborhood of Painesville, where it is understood they continue to make converts. The last we heard from the Missouri emigrants was, that theywere at some loss to find the promised land. They maintain a community of property, and repose their religious faith upon the book of Mormon as their bible, and the dogmas of their prophets. The book is a cunningly devised tissue of incongruities, adapted to vulgar prejudice, and written in imitation of the style of the Scriptures, and contains frequent allusions to scripture history and doctrines. It is a singular proof of the proneness of the human heart to idolatry, that such a gross and absurd imposition should find disciples, in the midst of the religious light that is spread abroad and every where surrounds us, in this country. It ought to a dmonish every teacher of religion who feels himself affected by a fiery zeal, whether of exclusive orthodoxy or of diffusive schism, to beware that he does not also become a fanatic.