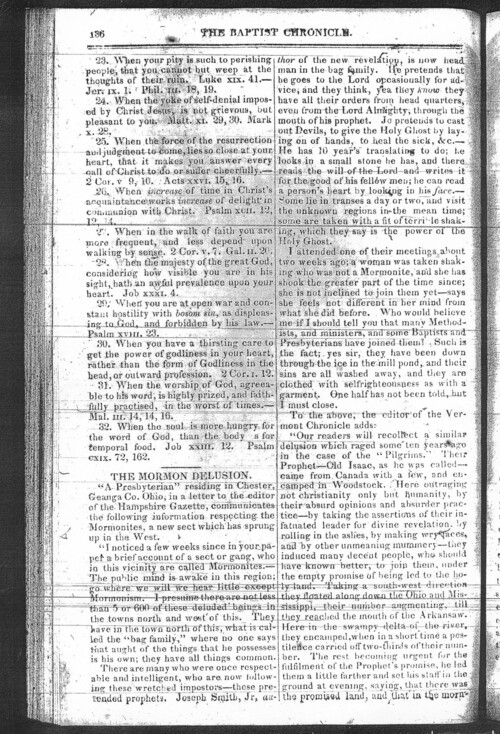 “The Mormon Delusion.” Baptist Chronicle and Literary Register (Georgetown, Kentucky)2, no. 9 (September 1831): 135–36. Reprinted from Hampshire Gazette (circa May 1831),and the Vermont Chronicle.

“A Presbyterian” residing in Chester, Geauga Co. Ohio, in a letter to the editor of the Hampshire Gazette, communicates the following information respecting the Mormonites, a new sect which has sprung up in the West.

“I noticed a few weeks since in your paper a brief account of a sect or gang, who in this vicinity are called Mormonites.—The public mind is awake in this region; go where we will we hear little except Mormonism. I presume there are not less than 5 or 600 of these deluded beings in the towns north and west of this. They have in the worn north of this, what is called the “bag family,” where no one says that aught of the things that he possesses is his own; they have all things common.

There are many who were once respectable and intelligent, who are now following these wretched impostors—these pretended prophets. Joseph Smith, Jr, author of the new revelation, is now head man in the bag family. He pretends that he goes to the Lord occasionally for advice, and they think, yea they know they have all their orders from head quarters, even from the Lord Almighty, through the mouth of his prophet. Jo pretends to cast out Devils, to give the Holy Ghost by laying on of hands, to heal the sick, &c.—He has 10 year’s translating to do; he looks in a small stone he has, and there reads the will of the Lord and writes it for the good of his fellow men; he can read a person’s heart by looking in his face.— Some lie in transes a day or two, and visit the unknown regions in the mean time; some are taken with a fit of terrible shaking, which they say is the power of the Holy Ghost.

I attended one of their meetings about two weeks ago; a woman was taken shaking who was not a Mormonite, and she has shook the greater part of the time since; she is not inclined to join them yet—says she feels not different in her mind from when she did before. Who would believe me if I should tell you that many Methodists, and ministers, and some Baptists and Presbyterians have joined them? Such is the fact; yes sir, they have been down through the ice in the mill pond, and their sins are all washed away, and they are clothed with selfrighteousness as with a garment. One half has not been told, but I must close.

To the above, the editor of the Vermont Chronicle adds:

“Our readers will recollect a similar delusion which raged some ten years ago, in the case of the “Pilgrims.” Their Prophet—Old Isaac, as he was called—came from Canada with a few, and encamped in Woodstock. Here outraging not christianity only but humanity, by their absurd opinions and absurder practice—by taking the assertions of their infatuated leader for divine revelation by rolling in the ashes, by making wry faces, and by other unmeaning mummery— they induced many decent people, who should have known better, to join them, under the empty promise of being led to the holy land. Taking a south-west direction they floated along down the Ohio and Mississippi, their number augmenting, till they reached the mouth of the Arkansaw.

Here in the swampy delta of the river, they encamped,when in a short time a pestilence carried off two-thirds of their number. The rest becoming urgent for the fulfillment of the Prophet’s promise, he led them a little farther and set his staff in the ground at evening, saying, that there was the promised land, and that in the morning, for proof, they would find the staff had put forth bud and blossom. But behold, in the morning they dry staff remained, and the Prophet had vanished, and with him the purse which contained the representative of their boasted community of property, together with all their pleasing hopes and dreamy visions.

From the resemblances between the Pilgrims and the Mormonites in manners and pretensions, we would think Old Isaac had reappeared in the person of Joe Smith, and was intending to make another speculation.”