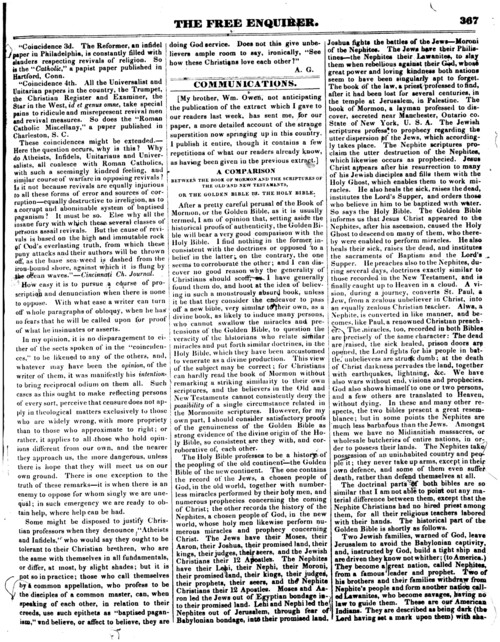 Owen, William. “A Comparison between the Book of Mormon and the scriptures of theOld and New Testaments, or The Golden Bible vs. The Holy Bible.” Free Enquirer (NewYork) (10 September 1831): 367–68.

[My brother, Wm. Owen, not anticipating the publication of the extract which I gave to our readers last week, has sent me, for our paper, a more detailed account of the strange superstition now springing up in this country. I publish it entire, though it contains a few repetitions of what our readers already know, as having been given in the previous extract.]

A COMPARISON BETWEEN THE BOOK OF MORMON AND THE SCRIPTURES OF THE OLD AND NEW TEATAMENTS,

OR THE GOLDEN BIBLE VS. THE HOLY BIBLE.

After a pretty careful perusal of the Book of Mormon, or the Golden Bible, as it is usually termed, I am of the opinion that, setting aside the historical proofs of authenticity, the Golden Bible will bear a very good comparison with the Holy Bible. I find nothing in the former inconsistent with the doctrines or opposed to a belief in the latter; on the contrary, the one seems to corroborate the other; and I can discover no good reason why the generality of Christians should scoff, as I have generally found them do, and hoot at the idea of believing in such a monstrously absurd book, unless it be that they consider the endeavor to pass off a new bible, very similar to their own, as a divine book, as likely to induce many persons, who cannot swallow the miracles and pretension of the Golden Bible, to question the veracity of the historians who relate similar miracles and put forth similar doctrines, in the Holy Bible, which they have been accustomed to venerate as a divine production. This view of the subject may be correct; for Christians can hardly read the book of Mormon without remarking a striking similarity to their own scriptures, and the believers in the Old and New Testaments cannot consistently deny the possibility of a single circumstance related in the Mormonite scriptures.

However, for my own part, I should consider satisfactory proofs of the genuineness of the Golden Bible as strong evidence of the divine origin of the Holy Bible, so consistent they are with, and corroborative of, each other.

The Holy Bible professes to be a history of the peopling of the old continent—the Golden Bible of the new continent. The one contains the record of the Jews, a chosen people of God, in the old world, together with numberless miracles performed by their holy men, and numerous prophecies concerning the coming of Christ; the other records the history of the Nephites, a chosen people of God, in the new world, whose holy men likewise perform numerous miracles and prophecy concerning Christ. The Jews have their Moses, their Aaron, their Joshua, their promised land, their kings, their judges, their seers, and the Jewish Christians their 12 Apostles.

The Nephites have their Lehi, their Nephi, their Moroni, their promised land, their kings their judges, their prophets, their seers, and the Nephite Christians their 12 Apostles. Moses and Aaron led the Jews out of Egyptian bondage into their promised land. Lehi and Nephi led the Nephites out of Jerusalem, through fear of Babylonian bondage, into their promised land. Joshua fights the battles of the Jews—Moroni of the Nephites. The Jews have their Philistines—the Nephites their Lamanites, to slay them when rebellious against their God, whose great power and loving kindness both nations seem to have been singularly apt to forget. The book of the law, a priest professed to find, after it had been lost for several centuries, in the temple at Jerusalem, in Palestine. The book of Mormon, a layman professed to discover, secreted near Manchester, Ontario co. State of New York, U.S.A. The Jewish scriptures profess to prophecy regarding the utter dispersion of the Jews, which accordingly takes place. The Nephite scriptures proclaim the utter destruction of the Nephites, which likewise occurs as prophecied. Jesus Christ appears after his resurrection to many of his Jewish disciples and fills them with the Holy Ghost, which enables them to work miracles. He also heals the sick, raises the dead, institutes the Lord’s Supper, and orders those who believe in him to baptized with water. So says the Holy Bible. The Golden Bible informs us that Jesus Christ appeared to the Nephites, after his ascension, caused the Holy Ghost to descend on many of them, who thereby were enabled to perform miracles. He also heals their sick, raises the dead, and institutes the sacraments of Baptism and the Lord’s Supper. He preaches also to the Nephites, during several days, doctrines exactly similar to those recorded in the New Testament, and is finally caught up to Heaven in a cloud. A vision, during a journey, converts St. Paul, a Jew, from a zealous unbeliever in Christ, into an equally zealous Christian teacher. Alwa, a Nephite, is converted in like manner, and becomes, like Paul, a renowned Christian preacher. The miracles, too, recorded in both Bibles are precisely of the same character: The dead are raised, the sick healed, prison doors are opened, the Lord fights for his people in battle, unbelievers are struck dumb; at the death of Christ darkness pervades the land, together with earthquakes, lightning, &c. We have also wars without end, visions and prophecies. God also shows himself to one or two persons, and a few others are translated to Heaven, without dying. In these and many other respects, the two bibles present a great resemblance; but in some points the Nephites are much less barbarous than the Jews. Amongst them we have no Midianitish massacres, or wholesale butcheries of entire nations, in order to possess their lands. The Nephites take possession of an uninhabited country and people it; they never take up arms in their own defence, and some of them even suffer death, rather than defend themselves at all.

The doctrinal parts of both bibles are so similar that I am not able to point out any material difference between them, except that the Nephite Christians had no hired priest among them, for all their religious teachers labored with their hands. The historical part of the Golden Bible is shortly as follows.

Two Jewish families, warned of God, leave Jerusalem to avoid the Babylonian captivity, and, instructed by God, build a tight ship and are driven they know not whither; (to America.) They become a great nation, called Nephites, from a famous leader and prophet. Two of his brothers and their families withdraw from the Nephite’s people and form another nation called Lawanites, who become savages, having no law to guide them. These are our American Indians.

They are described as being dark (the Lord having set a mark upon them) with sha-[pp.368]ven heads, except a small tuft of hair, and naked except round the loins, and barbarous, fierce and savage. They are continually at war with the Nephites, and are beaten, whenever the Nephites follow the commands of God; finally, however, the Nephites become very wicked and the Lawanites kill the whole of them, about 200,000 in desperate battle. One man alone escapes who writes the conclusion of their history on a plate of brass, and hides it by God’s command, together with a number of plates which contain the whole history of the Nephites, written at each period, by their leader for the time being, and by him handed to his successor in office, to be preserved and continued by him until his death, to be by him handed to his successor, and so on.

These plates, Smith the publisher of the Golden Bible professes to have discovered and translated by the help of God. Eleven witnesses, three of whom profess to have been taught the truth of the book by an angel from heaven, and profess to have seen the plates. The style is very Biblical, and the grammar good, with few exceptions. Smith is said to be illiterate. The believers in the book of Morman amount already to about 1600. They have been living near Fairport, Ohio, but are going to Missouri so soon as they can get land there to settle on. A man who resides near them, told me he knew many of them, and that they were generally very peaceable, inoffensive men and of good character. Their preachers appear to have drawn great crowds to hear them preach.