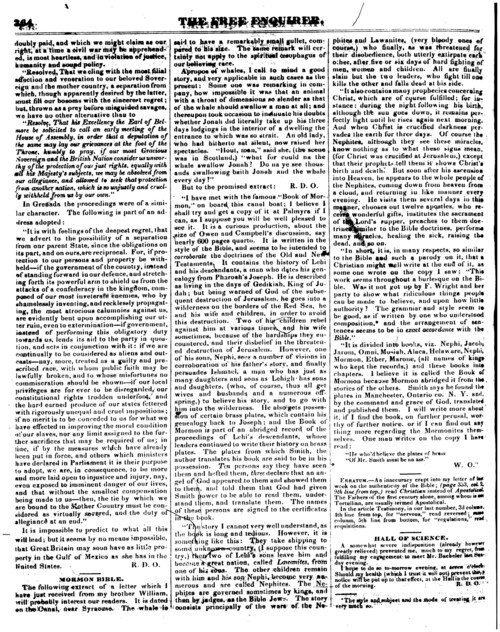 . . . . I have met with the famous “Book of Mormon,” on board this canal boat; I believe I shall try and get a copy of it at Palmyra if I can, as I suppose you will be well pleased to see it. It is a curious production, about the size Owen and Campbell’s discussion, say nearly 600 pages quarto. It is written in the style of the Bible, and seems to be intended to corroborate the doctrines of the Old and New Testaments. It contains the history of Lehi and his descendants, a man who dates his genealogy from Pharoah’s Joseph. He is described as living in the days of Gedikiah, King of Judah; but being warned of God of the subsequent destruction of Jerusalem, he goes into a wilderness on the borders of the Red Sea, he and his wife and children, in order to avoid this destruction. Two of his children rebel against him at various times, and his wife sometimes, because of the hardships they encountered, and their disbelief in the threatened destruction of Jerusalem. However, one of his sons, Nephi, sees a number of visions in corroboration of his father’s story, and finally persuades Ishmael, a man who has just as many daughters and sons as Lehigh has sons and daughters, (who, of course, thus all get wives and husbands and a numerous offspring,) to believe his story, and to go with him into the wilderness.

He also gets possession of certain brass plates, which contain his genealogy back to Joseph; and the Book of Mormon is part of an abridged record of the proceedings of Lehi’s descendants, whose leaders continued to write their history on brass plates. The plates from which Smith, the author translates his book are said to be in his possession. Ten persons say they have seen them and hefted them, three declare that an angel of God appeared to them and showed them to them, and told them that God had given Smith power to be able to read them, understand them, and translate them. The names of those persons are signed to the certificates in the book.

The story I cannot very well understand, as the book is long and tedious. However, it is something like this: They take shipping to some unknown country, (I suppose this country,) then two of Lehi’s sons leave him and become a great nation, called Lawanites, from one of his sons.

The other children remain with him and his son Nephi, become very numerous and are called Nephites. The Nephites are governed sometimes by kings, and then by judges as the Bible Jews.

The story consists principally of the wars of the Nephites and Lawanites, (very bloody ones of course,) who finally, as was threatened for their disobedience, both utterly extirpate each other, after fix or six days of hard fighting of men, women and children. All are finally slain but the two leaders, who fight till one kills the other and falls dead at his side.

It also contains many prophecies concerning Christ, which are of course fulfilled; for instance: during the night following his birth, although the son goes down, it remains perfectly light until he rises again next morning. And when Christ is crucified darkness pervades the earth for three days. Of course the Nephites, although they see these miracles, know nothing as to what these signs mean, (for Christ was crucified at Jerusalem,) except that their prophets tell them it shows Christ’s birth and death. But soon after his ascension into Heaven, he appears to the whole people of the Nephites, coming down from heaven from a cloud, and returning in like manner every evening. He visits them several days in this manner, chooses out twelve apostles, who receive wonderful gifts, institutes the sacrament of the Lord’s supper, preaches to them doctrines similar to the Bible doctrines, performs many miracles, healing the sick, raising the dead, and so on.

In short, it is, in many respects, so similar to the Bible and such a parody on it, that a Christian might well write at the end of it, as some one wrote on the copy I saw: “This work seems throughout a burlesque on the Bible. Was it not got up by F. Wright and her party to show what ridiculous things people can be made to believe, and upon how little authority? The grammar and style seem to be good, as if written by one who understood composition,1 and the arrangement of sentences seems to be in exact accordance with the Bible.”

It is divided into books, viz. Nephi, Jacob, Jarom, Omni, Mosiah, Alaca, Helaware, Nephi, Mormon, Ether, Marone, (all names of kings who kept the records,) and these books into chapters. I believe it is called the Book of Mormon because Mormon abridged it from the stories of the others. Smith says he found the plates in Manchester, Ontario co. N. Y. and, by the command and grace of God, translated and published them. I will write more about it if I find the book, on further perusal, worthy of further notice. or if I can find out anything more regarding the Mormonites themselves. One man writes on the copy I have read.

“He who’d believe the plates of brass

1 The style and subject and the mode of treating it are very much so.