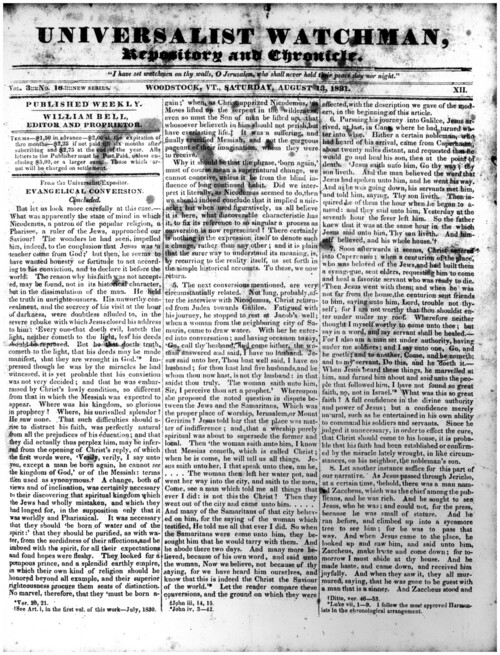 BR. BELL: The following is an extract of a letter written by a person in the town of Hiram, State of Ohio, to his brother in Vermont; you are at liberty to publish it or any part thereof.

“Doubtless you have heard of the Golden Bible or book of Mormon, which was said to be found in Manchester, N. Y. Joseph Smith is the author and proprietor of the book. He says it is a special revelation from God; delivered to him by God’s holy angel—he assumes the character of one of God’s greatest prophets. He got all the followers he could in his own vicinity, and then pretended to heave a call to move on westward, and accordingly made a stand in Cauga county, in and about the town of Mentor Ohio, which he predicted was the new Jerusalem they were in pursuit of. There he got some hundreds of followers, among which was one Elder Rigdon, a Campbellite preacher. Several people went from here out of curiosity to see them; they were deluded by the prophet Jo, and became dupes to one of the greatest impositions ever practiced among mankind. Finally Jo Smith, and several inferior prophets come to Hiram and Nelson, where they have succeeded in making proselytes to the amount of one hundred, among which are the two Priests & Booth—Carnot Mason, Rider and all the Pitkin family from Hartford Vermont.

John Johnson, and all his family from Pomfret Vt. Charles Raymond, Aruna & John Tilden, S. R. Parker, T. Brace, all the Hewlits, ten or fifteen in number, P. Alleyn & family, and all the fools in this Country. The prophet Jo has had a new revelation, in which he says God has told him and his followers, that the land of promise is on the Missouri, about 1200 miles to the west of this place, therefore they all want to sell out here as soon as they can, which makes it an excellent chance to buy farms. Twenty eight apostles have started on a mission up the Missouri, among the heathen which they say are the lost tribes of Israel, which God is about to restore. They think the millennium is about to take place, and believe that all those who join the Mormonites and follow the prophet Jo will live a thousand years, and finally never die; but all who do not join them will be destroyed from the face of the earth in the course of two or three years. They pretend to work miracles, and give the gift of the holy spirit, heal the sick, open the eyes of the blind &c. And yet their followers are so full in the faith they do not detect their impositions. John Johnson and his wife have started on a mission to Vermont, to warn their friends in that country to flee from the wrath to come. I think, however, he will not make much by preaching mormonism in that country. I could sit and write about the mormonites all day, but I think I have wrote enough on that subject; and I presume you will consider it hardly worth reading; but it is disgusting to see what damnable work they do make under the garb of religion. I sometimes think I could never hear the word religion or priest.”