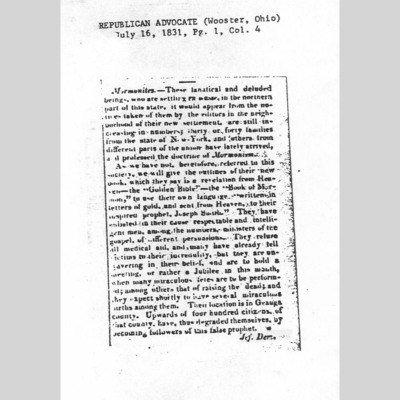 Mormonites. —These fanatical and deluded beings, who are settling en masse, in the northern part of this state, it would appear from the numbers taken of them by the editors in the neighborhood of their new settlement, are still increasing in numbers; thirty or forty families from the state of New-York, and others from different parts of the union have lately arrived, and professed the doctrine of Mormonism.

As we have not, heretofore, referred to this society, we will give the outlines of their new book, which they say is a revelation from Heaven—the “Golden Bible”—the “Book of Mormon,” to use their own language, “written in letters of gold, and sent from Heaven, to their inspired prophet, Joseph Smith.” They have enlisted in their cause respectable and intelligent men, among the numbers, ministers of the gospel, of different persuasions. They refuse all medical aid, and many have already fell victims to their incredulity, but they are unwavering in their belief, and are to hold a meeting, or rather a Jubilee in this month, when many miraculous fetes are to be performed; among others that of raising the dead; and they expect shortly to have several miraculous arths among them. Then location is in Geauga County. Upwards of four hundred citizens, of that county, have, thus degraded themselves, by becoming followers of this false prophet.