Authenticity of the Golden Bible—References to the Book of Mormon 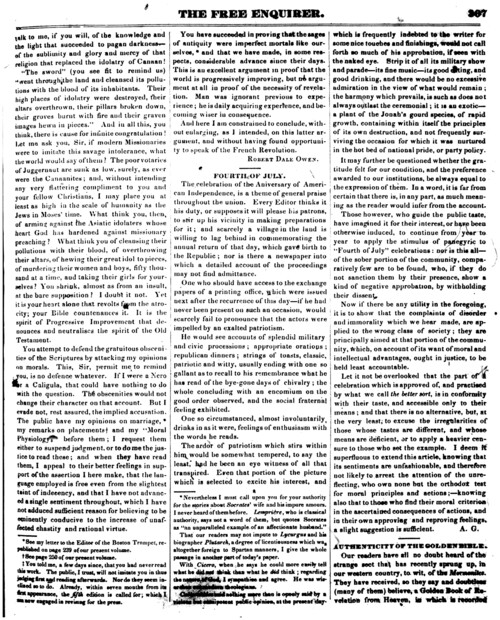 AUTHENTICITY OF THE GOLDEN BIBLE.

Our readers have all no doubt heard of the strange sect that has recently sprung up, to our western country, to wit, of the Mormonites. They have received, so they say and doubtless (many of them) believe, a Golden Book of Revelation from Heaven, in which is recorded [307] “whatever is profitable for doctrine, for reproof, for correction, for instruction in righteousness.”

Their numbers already amount to many hundreds, and they seem enthusiastically devoted to their new creed. Here is the last paragraph I have noticed regarding them:

From the Painesville (Ohio) Gazette.

This infatuated people are again in motion. In their own cant phrase, “they are going to inherit the promise of God to Abraham and his seed.” Their destination is some indefinite spot on the Missouri river, they say about 1500 miles distant.—About 80 of them have recently been ordained, and some have gone, others are about going, two and two, part by the western rivers, and part by land, to their distant retreat, far away from the cheering voice of civilised man. Those who have disposed of their property go now, and such as have property, are making market for it so eagerly as often to disregard pecuniary interests, and all are to follow with all convenient dispatch. They still persist in the power to work miracles. They say they often have seen them done—the sick are healed—the lame walk—devils are cast out—and these assertions are made by men heretofore considered rational, and men of truth.

Man is a strange animal—and the lesson before us ought to tech us humility for ourselves, and forbearance towards the opinions of others; for though we are still of the opinion that the leaders of this faction are as gross imposters as was Jemima Wilkinson, yet we have no doubt the great body of their followers are sincere and honest.

Man is a strange animal, and the lesson before us may teach is more than humility and forbearance. It may teach us incredulity in all marvels and mysteries.

How often do we hear such arguments as the following urged as unanswerable in proof of the divine origin of Christianity: “Is it credible that men should imagine they had miraculous power, and should be capable of persuading their fellow-creatures of that, which, if an untruth at all, was so palpable an one? The primitive Christians could neither be deceivers nor deceived. If deceivers, would they have voluntarily and cheerfully endured reproach and loss? As eye-witnesses, and actors on the stage itself, could they be deceived.”

Apply the argument to the above case of the Mormonites; and it will go to prove that their golden Bible was writ by the finger of the Almighty, and their miracles performed by his divine interposition.