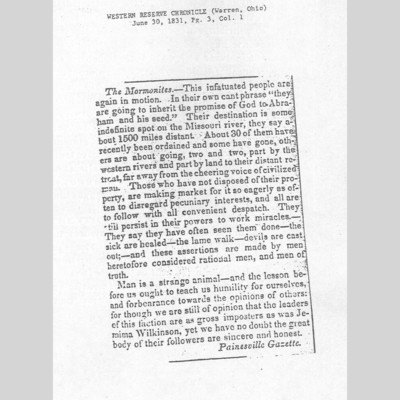 The Mormonites.— This infatuated people are again in motion. In their own cant phrase, “they are going to inherit the promise of God to Abraham and his seed.” Their destination is some indefinite spot on the Missouri River, they say about 1500 miles distant. About 30 of them have recently been ordained and some have gone, others are about going, two and two, part by the western rivers and part by land to their distant retreat, far away from the cheering voice of civilized man. Those who have disposed of their property go now, and such as have property, are making market for it so eagerly as often to disregard pecuniary interests, and all are to follow with all Convenient dispatch. They still persist in their powers to work miracles. They say they have often seen them done—the sick are healed—the lame walk—devils are cast out:—and these assertions are made by men heretofore considered rational men, and men of truth.

Man is a strange animal—and the lesson before us ought to teach us humility for ourselves, and forbearance towards the opinions of others: for though we are still of opinion that the leaders of this faction are as gross imposters as was Jemima Wilkinson, yet we have no doubt the great body of their followers are sincere and honest.