Evangelical Magazine B., A. W. 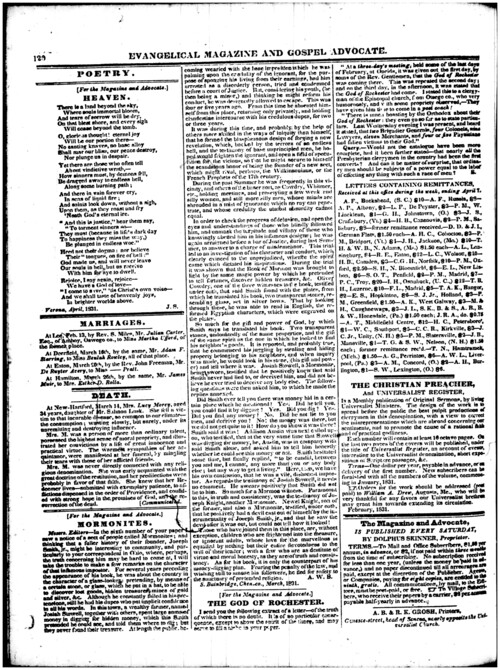 Messrs. Editors— In the sixth number of your paper I saw a notice of a sect of people called Mormonites; and thinking that a fuller history of their founder, Joseph Smith, jr., might be interesting to community, and particularly to your correspondent in Ohio, where, perhaps, the truth concerning him may be hard to come at, I will take the trouble to make a few remarks on the character of that infamous impostor. For several years preceding the appearance of his book, he was about the country in the character of a glass-looker: pretending, by means of a certain stone, or glass, which he put in a hat, to be able to discover lost goods, hidden treasures, mines of gold and silver, &c. Although he constantly failed in his pretensions, still he had his dupes who put implicit confidence in all his words. In this town, a wealthy farmer, named Josiah Stowell, together with others, spent large sums of money in digging for hidden money, which this Smith pretended he could see, and told them where to dig; but they never found their treasure. At length the public, becoming wearied with the base imposition which he was palming upon the credulity of the ignorant, for the purpose of sponging his living from their earnings, had him arrested as a disorderly person, tried and condemned before a court or Justice. But, considering his youth, (he then being a minor,) and thinking he might reform his conduct, he was designedly allowed to escape. This was four or five years ago. From this time he absented himself from this place, returning only privately, and holding clandestine intercourse with his credulous dupes, for two or three years.

It was during this time, and probably by the help of others more skilled in the ways of iniquity than himself, that he formed the blasphemous design of forging a new revelation, which, backed by the terrors on an endless hell, and the testimony of base unprincipled men, he hoped would frighten the ignorant, and open a field of speculation for the vicious, so that he might secure to himself the scandalous honor of being the founder of a new sect, which might rival, perhaps, the Wilkinsonians, or the French Prophets of the 17th century.

During the past Summer he was frequently in this vicinity, and others of the baser sort, as Cowdry, Whitmer, etc., holding meetings, and proselyting a few weak and silly women, and still more silly men, whose minds are shrouded in a mist of ignorance which no ray can penetrate, and whose credulity the utmost absurdity cannot equal.

In order to check the progress of delusion, and open the eyes and understandings of those who blindly followed him, and unmask the turpitude and villany of those who knowingly abetted him in his infamous designs; he was again arraigned before a bar of Justice, during last Summer, to answer to a charge of misdemeanor. This trial led to an investigation of his character and conduct, which clearly evinced to the unprejudiced, whence the spirit came which dictated his inspirations. During the trial it was shown that the Book of Mormon was brought to light by the same magic power by which he pretended to tell fortunes, discover hidden treasures, &c. Oliver Cowdry, one of the three witnesses to the book, testified under oath, that said Smith found with the plates, from which he translated his book, two transparent stones, resembling glass, set in silver bows. That by looking through these, he was able to read in English, the formed Egyptian characters, which were engraved on the plates.

So much for the gift and power of God. by which Smith says he translate his book. Two transparent stones, undoubtedly of the same properties, and the gift of the same spirit as the one in which he looked to find his neighbor’s goods. It is reported, and probably true, that he commenced his juggling by stealing and hiding property belonging to his neighbors, and when inquiry was made, he would look in his stone, (his gift and power) and tell where it was. Josiah Stowell, a Mormonite, being sworn, testified that he positively knew that said Smith never had lied to, or deceived him, and did not believe he ever tried to deceive any body else. The following questions were then asked him, to which he made the replies annexed.

Did Smith ever tell you there was money hid in a certain place which he mentioned? Yes.

No. Did he not lie to you then, and deceive you? No! the money was there, but we did not get quite to it! How do you know it was there? Smith said it was! Addison Austin was next called upon, who testified, that at the very same time that Stowell was digging for money, he, Austin, was in company with said Smith alone, and asked him to tell him honestly whether he could see this money or not. Smith hesitated some time, but finally replied, “to be candid, between you and me, I cannot, any more than you or any body else; but any way to get a living.” Here, then, we have his own confession, that he was a vile, dishonest impostor. As regards the testimony of Josiah Stowell, it needs no comment. He swears positively that Smith did not lie to him. So much for a Mormon witness. Paramount to this, in truth and consistency, was the testimony of Joseph Knight, another Mormonite. Newel Knight, son of the former, and also a Mormonite, testified, under oath, that he positively had a devil cast out of himself by the instrumentality of Joseph Smith, jr., and that he saw the devil after it was out, but could not tell how it looked!

Those who have joined them in this place, are, without exception, children who are frightened into the measure, or ignorant adults, whose love for the marvellous is equalled by nothing but their entire devotedness to the will of their leader; with a few who are as destitute of virtue and moral honesty, as they are of truth and consistency. As for his book, it is only the counterpart of his money-digging plan. Fearing the penalty of the law, and wishing still to amuse his followers, he fled for safety to the sanctuary of pretended religion.