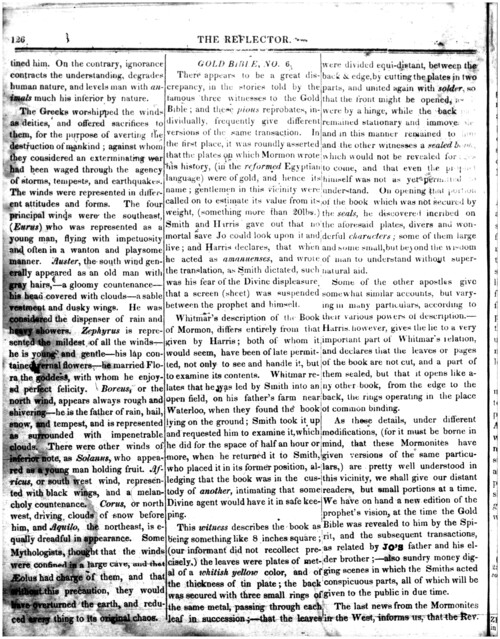 There appears to be a great discrepancy, in the stories told by the famous three witnesses to the God Bible; and these pious reprobates, individually, frequently give different versions of the same transaction. In the first place, it was roundly asserted that the plates on which Mormon wrote his history, (in the reformed Egyptian language) were of gold, and hence its name; gentlemen in this vicinity were called on to estimate its value from its weight, (something more than 20 lbs). Smith and Harris gave out that no mortal save Jo could look upon it and live; and Harris declares, that when he acted as amanuensis, and wrote the translation, as Smith dictated, such was his fear of the Divine displeasure that a screen (sheet) was suspended between the prophet and himself.

Whitmar’s description of the Book of Mormon, differs entirely from that given by Harris; both of whom it would seem have been of late permitted, not only to see and handle it, but to examine its contents. Whitmar relates that he was led by Smith into an open field, on his father’s farm near Waterloo, when they found the book lying on the ground; Smith took it up and requested him to examine it, which he did for the space of half an hour or more, when he returned it to Smith, who placed it in its former position, alledging that the book was in the custody of another, intimating that some Divine agent would have it in safe keeping.

This witness describes the book as being something like 8 inches square; (our informant did not recollect precisely,) the leaves were plates of metal of a whitish yellow color, and of the thickness of tin plate; the back was secured with three small rings of the same metal, passing through each leaf in succession;—that the leaves were divided equi-distant, between the back & edge, by cutting the plates in two parts, and united again with solder, so that the front might be opened, as it were by a hinge, while the back part remained stationary and immoveable, and in this manner remained to him and the other witnesses a sealed book, which would not be revealed for ages to come, and that even the prophet himself was not as yet permitted to understand. On opening that portion of the book which was not secured by the seals, he discovered incribed on the aforesaid plates, divers and wonderful characters; some of them large and some small,but beyond the wisdom of man to understand without supernatural aid.

Some of the other apostles give somewhat similar accounts, but varying in many particulars, according to their various powers of description.—Harris, however, gives the lie to a very important part of Whitmar’s relation, and declares that the leaves or pages of the book are not cut, and a part of them sealed, but that it opens like any other book, from the edge to the back, the rings operating in the place of common binding.

As these details, under different modifications, (for it must be borne in mind, that these Mormonites have given versions of the same particulars,) are pretty well understood in this vicinity, we shall give our distant readers, but small portions at a time. We have on hand a new edition of the prophet’s vision, at the time the Gold Bible was revealed to him by the Spirit, and the subsequent transactions, as related by JO’S father and his elder brother;—also sundry money digging scenes in which the Smiths acted conspicuous parts, all of which will be given to the public in due time.

The last news from the Mormonites in the West, informs us, that the Rev. [126] Mr. Campbell of the State of Ohio, has given an analysis of the Book of Mormon, in the “Painesville Telegraph,” and is going to examine in divine pretensions. Mr. C. is reputed a man of talents and learning, and the exposition will be interesting to the curious reader. Cowdery is far up the Missouri, converting the Indians.