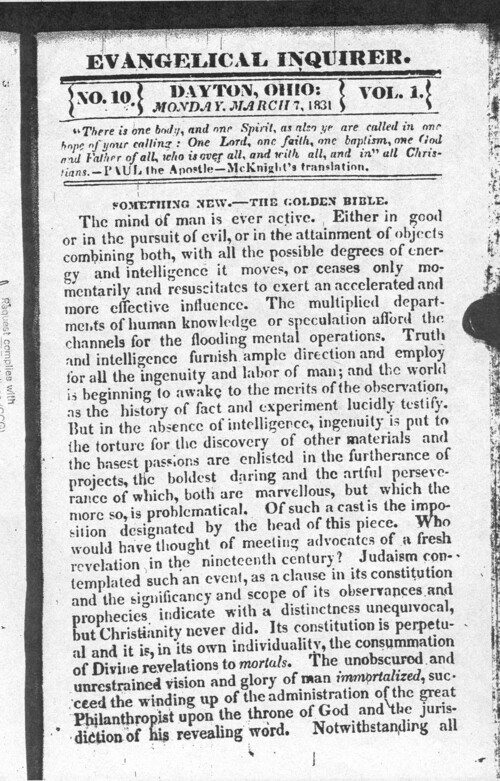 The mind of man is ever active. Either in good or in the pursuit of evil, or in the attainment of objects combining both, with all the possible degrees of energy and intelligence it moves, or ceases only momentarily and resuscitates to exert an accelerated and more effective influence. The multiplied departments of human knowledge or speculation afford the channels for the flooding mental operations. Truth and intelligence furnish ample direction and employ for all the ingenuity and labor of man; and the world is beginning to awake to the merits of the observation, as the history of fact and experiment lucidly testify. But in the absence of intelligence, ingenuity is put to the torture for the discovery of other materials and the basest passions are enlisted in the furtherance of projects, the boldest daring and the artful perserverance of which, both are marvellous, but which the more so, is problematical. Of such a cast is the imposition designated by the head of this piece. Who would have thought of meeting advocates of a fresh revelation in the nineteenth century? Judaism contemplated such an event, as a clause in its constitution and the significancy and scope of its observances and prophecies indicate with a distinctness unequivocal, but Christianity never did. Its constitution is perpetual and it is, in its own individuality, the consummation of Divine revelations to mortals. The unobscured and unrestrained vision and glory of man immortalized, succeed the winding up of the administration of the great Philanthropist upon the throne of God and the jurisdiction of his revealing word. Notwithstanding all [217] this, some hundreds of the rabble and a few intelligent citizens of the western part of New York and the eastern part of Ohio, have, with the wildest enthusiasm, embraced a feigned revelation purporting to be literally new. From the advocates of this new religion called Mormonism, from a letter received from the intelligent Post Master at Palmyra, extracts from Mr. Thomas Campbell’s letters and other sources, embracing the subjoined pieces taken from the Telegraph of Painesville, O.: from these different quarters I learn the following particulars. For a long time in the vicinity of Palmyra, there has existed an impression, especially among certain loose classes of society, that treasures of great amount were concealed near the surface of the earth, probably by the Indians, whom they were taught to consider the descendants of the ten lost Israelitish tribes, by the celebrated Jew who a few years since promised to gather Abraham’s sons on Grand Island, thus to be made a Paradise. The ignorance and superstition of these fanatics soon conjured up a ghost, who they said was often seen and to whom was committed the care of the precious deposit. This tradition made money diggers of many who had neither intelligence nor industry sufficient to obtain a more reputable livelihood. But they did not succeed and as the money was not dug up, something must be dug up to make money. The plan was laid, doubtless, by some person behind the curtain, who selected suitable tools. One Joseph Smith, a perfect ignoramus, is to be a great prophet of the Lord, the fabled ghost the angel of his presence, a few of the accomplices the apostles or witnesses of the imposition, and, to fill up the measure of their wickedness and the absurdity of their proceedings, the hidden golden treasure, is to be a golden bible and a new revelation. This golden bible consisted of metallic plates six or seven inches square, of the thickness of tin and resembling gold, the surface of which was covered with hieroglyphic characters, unintelligible to Smith, the finder, who could [218] not read English. However the angel (ghost!) that discovered the plates to him, likewise informed him that he would be inspired to translate the inscriptions without looking at the plates, while an amanuensis would record his infallible reading; all which was accordingly done. But now the book must be published, the translation of the inscriptions which Smith was authorized to show to no man save a few accomplices, who subscribe a certificate of these pretended facts at the end of the volume. Truly a wise arrangement! Among the gang none had real estate save one, who mortgaged his property to secure the printer and binder in Palmyra, but who was so unfortunate as not to be able to convert his wife to the new faith, though he flogged her roundly for that purpose several times. The book, an octavo of from 500 to 1000 pages (for when I saw it I did not notice the number) did not meet ready sale and consequently about 500 copies were sent to the eastern part of this state, which was considered a better market. Though at home it had but little success, the subjoined pieces will show that in the Western Reserve it found better.

Here I must devote a moment to another branch of the subject. The Baptist Chronicle of Ky. and similar works, have endeavored to fasten this imposition upon the current reformation, as the doings of Munzer have been fastened upon the Baptists of his own stamp. It and other ungentlemanly insinuations may yet stamp the character of this periodical so as not to subserve the interest of the cause it advocates, or the honor of its conductors. Let all those who would identify Mr. Campbell and those associated with him with this Mormonitish absurdity, know that this new project makes no approach towards the reformation in its character or object, but would indicate a parentage nearer home. Let them know that a prominent Elder, (I mean an aged christian officer) Thomas Campbell, father of the justly celebrated Alexander Campbell, has offered to meet the apostate champion of this un [219] holy imposition and publicly discuss its merits and that the intelligent reformers concur with him; that among the Mormonitish converts are found persons from among all the denominations, Presbyterians, Methodists, and that they are as liable to the charge of having originated the scheme as are the reformers; and indeed, that upon the same ground the Baptist Chroniclers are not unimpeachable. For my own part, sometime since, having met one of these new fangled teachers in a congregation with which neither of us was connected, I refused to occupy the pulpit if he were invited, well knowing that a reformer by so doing would give occasion to misrepresentation. I had no other particular reason for my refusal, unless it was that the man proclaimed another gospel written in another book.

The following documents will finish the tale of woe.