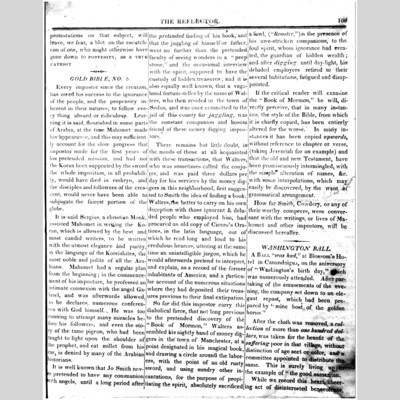 Every impostor since the creation, has owed his success to the ignorance of the people, and the propensity inherent in their natures, to follow every thing absurd or ridiculous. Learning it is said, flourished in some parts of Arabia, at the time Mahomet made his appearance, and this may sufficiently account for the slow progress that impostor made for the first years of his pretended mission, and had not the Koran been supported by the sword the whole imposition, in all probability, would have died in embryo, and the disciples and followers of the crescent, would never have been able to subjugate the fairest portion of the globe.

It is said that Sergius, a christian Monk, assisted Mahomet in writing the Koran, which is allowed by the best and most candid writers, to be written with the utmost elegance and purity, in the language of the Koreishites, the most noble and polite of all the Arabians. Mahomet had a regular plan from the beginning; in the commencement of his imposture, he professed an intimate connexion with the angel Gabriel, and was afterwards allowed, as he declares, numerous conferences with God himself. He was too cunning to attempt many miracles before his followers, and even the story of the tame pigeon, who had been taught to light upon the shoulder of the prophet, and eat millet from his ear, is denied by many Arabian historians.

It is well known that Jo Smith never pretended to have any communion with angels, until a long period after the pretended finding of his book, and that the juggling of himself or father, went no further than the pretended faculty of seeing wonders in a “peep stone,” and the occasional interview with the spirit, supposed to have the custody of hidden treasures; and it is also equally well known, that a vagabond fortune-teller by the name of Walters, who then resided in the town of Sodus, and was once committed to the jail of this county for juggling, was the constant companion and bosom friend of these money digging impostors.

There remains but little doubt, in the minds of those at all acquainted with these transactions, that Walters, who was sometimes called the conjurer, and was paid three dollars per day for his services by the money diggers in this neighborhood, first suggested to Smith the idea of finding a book. Walters, the better to carry on his own deception with those ignorant & deluded people who employed him, had procured an old copy of Cicero’s Orations, in the latin language, out of which he read long and loud to his credulous hearers, uttering at the same time an unintelligible jargon, which he would afterwards pretend to interpret, and explain, as a record of the former inhabitants of America, and a particular account of the numerous situations where they had deposited their treasures previous to their final extirpation.

So far did this impostor carry this diabolical farce, that not long previous to the pretended discovery of the “Book of Mormon,” Walters assembled his nightly band of money diggers in the town of Manchester, at a point designated in his magical book, and drawing a circle around the laborers, with the point of an old rusty sword, and using sundry other incantations, for the purpose of propitiating the spirit, absolutely sacrificed a fowl, (“Rooster,”)in the presence of his awe-stricken companions, to the foul spirit, whom ignorance had created, the guardian of hidden wealth; and after digging until day-light, his deluded employers retired to their several habitations, fatigued and disappointed.

If the critical reader will examine the “Book of Mormon,” he will directly perceive, that in many instances, the style of the Bible, from which it is chiefly copied, has been entirely altered for the worse. In many instances it has been copied upwards, without reference to chapter or verse, (taking Jeremiah for an example) and that the old and new Testament, have been promiscuously intermingled, with the simple alteration of names, &c. with some interpolations, which may easily be discovered, by the want of grammatical arrangement.

How far Smith, Cowdery, or any of their worthy compeers, were conversant with the writings, or lives of Mahomet and other impostors, will be discussed hereafter.