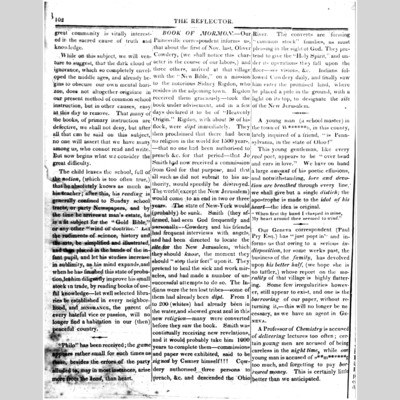 BOOK OF MORMON.— Our Painesville correspondent informs us, that about the first of Nov. last, Oliver Cowdery, (we shall notice this character in the course of our labors,) and three others, arrived at that village with the “New Bible,” on a mission to the notorious Sidney Rigdon, who resides in the adjoining town. Rigdon received them graciously—took the book under advisement, and in a few days declared it to be of “Heavenly Origin.” Rigdon, with about 20 of his flock, were dipt immediately. They then proclaimed that there had been no religion in the world for 1500 years,—that no one had been authorised to preach &c. for that period—that Jo Smith had now received a commission from God for that purpose, and that all such as did not submit to his authority, would speedily be destroyed. The world (except the New Jerusalem) would come to an end in two or three years. The state of New-York would (probably) be sunk.

Smith (they affirmed), had seen God frequently and personally—Cowdery and his friends had frequent interviews with angels, and had been directed to locate the site for the New Jerusalem, which they should know, the moment they should “step their feet” upon it. They pretend to heal the sick and work miracles, and had made a number of unsuccessful attempts to do so. The Indians were the ten lost tribes—some of them had already been dipt. From 1 to 200 (whites) had already been in the water,and showed great zeal in this new religion—many were converted before they saw the book. Smith was continually receiving new revelations, and it would probably take him 1000 years to complete them—commissions and paper were exhibited, said to be signed by CHRIST himself!!! Cowdery authorised three persons to preach, &c. and descended the Ohio River. The converts are forming “common stock” families, as most pleasing in the sight of God. They pretend to give the “Holy Spirit,” and under its operations they fall upon the floor—see visions, &c. Indians followed Cowdery daily, and finally saw him enter the promised land, where he placed a pole in the ground, with a light on its top, to designate the site of the New Jerusalem.