“A friend in Chagrin, Ohio” 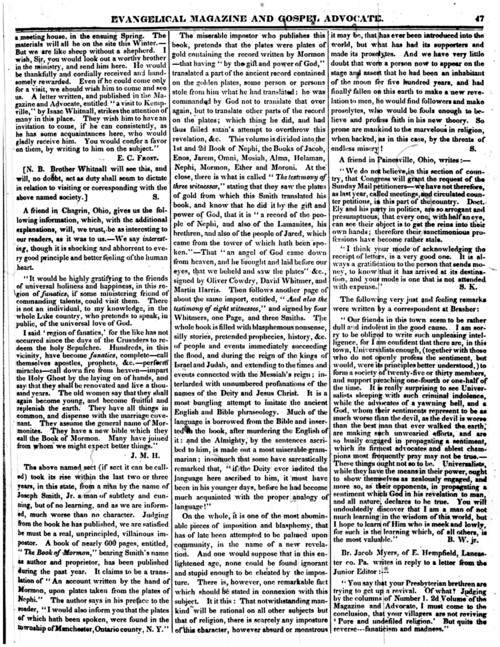 A friend in Chagrin, Ohio, gives us the following information, which, with the additional explanations, will, we trust, be as interesting to our readers, as it was to us.—We say interesting, though it is shocking and abhorrent to every good principle and better feeling of the human heart.

“It would be highly gratifying to the friends of universal holiness and happiness, in this region of fanatics, if some mastering friend of commanding talents, could visit them. There is not an individual, to my knowledge, in the whole Lake country, who pretends to speak, in public, of the universal love of God.

I said ‘region of fanatics,’ for the like has not occurred since the days of the Crusaders to redeem the holy Sepulchre. Hundreds, in this vicinity, have become fanatics, complete—call themselves apostles, prophets, &c.—perform miracles—call down fire from heaven—impart the Holy Ghost by the laying on of hands, and say that they shall be renovated and live a thousand years. The old women say that they shall again become young, and become fruitful and replenish the earth. They have all things in common, and dispense with the marriage covenant. They assume the general name of Mormonites. They have a new bible which they call the Book of Mormon. Many have joined from whom we might expect better things.”

The above named sect (if sect it can be called) took its rise within the last two or three years, in this state, from a man by the name of Joseph Smith, Jr. a man of subtlety and cunning, but of no learning, and as we are informed, much worse than no character. Judging from the book he has published, we are satisfied he must be a real, unprincipled, villainous impostor. A book of nearly 600 pages, entitled, “The Book of Mormon,” bearing Smith’s name as author and proprietor, has been published during the past year. It claims to be a translation of “An account written by the hand of Mormon upon plates taken from the plates of Nephi.” The author says in his preface to the reader, “I would also inform you that the plates of which hath been spoken, were found in the township of Manchester, Ontario county, N.Y.”

[column 2]The miserable impostor who publishes this book, pretends that the plates were plates of gold containing the record written by Mormon—that having “by the gift and power of God,” translated a part of the ancient record contained on the golden plates, some person or persons stole from him what he had translated; he was commanded by God not to translate that over again, but to translate other parts of the record on the plates; which thing he did, and had thus failed satan’s attempt to overthrow this revelation, &c. This volume is divided into the 1st and 2d Book of Nephi, the Books of Jacob, Enos, Jarem, Omni, Mosiah, Alma, Helaman, Nephi, Mormon, Ether and Moroni. At the close, there is what is called “The Testimony of three witnesses,” stating that they saw the plates of gold from which this Smith translated his book, and know that he did it by the gift and power of God, that it is “a record of the people of Nephi, and also of the Lamanites, his brethren, and also of the people of Jared, which came from the tower of which hath been spoken.”—That “an angel of God came down from heaven, and he brought and laid before our eyes, that we beheld and saw the plates” &c., signed by Oliver Cowdry, David Whitmer, and Martin Harris. Then follows another page of about the same import, entitled, “And also the testimony of eight witnesses,” and signed by four Whitmers, one Page, and three Smiths. The whole book is filled with blasphemous nonsense, silly stories, pretended prophecies, history, &c. of people and events immediately succeeding the flood, and during the reign of the kings of Israel and Judah, and extending to the times and events connected with the Messiah’s reign; interlarded with unnumbered profanations of the names of the Deity and Jesus Christ. It is a most bungling attempt to imitate the ancient English and Bible phraseology. Much of the language is borrowed from the Bible and inserted in the book, after murdering the English of it: and the Almighty, by the sentences ascribed to him, is made out a most miserable grammarian; insomuch that some have sarcastically remarked that, “if the Deity ever indited the language here ascribed to him, it must have been in his younger days, before he had become much acquainted with the proper analogy of language!”

On the whole, it is one of the most abominable pieces of imposition and blasphemy, that has of late been attempted to be palmed upon community, in the name of a new revelation. And one would suppose that in this enlightened age, none could be found ignorant and stupid enough to be cheated by the imposture. There is, however, one remarkable fact which should be stated in connexion with this subject. It is this: That notwithstanding mankind will be rational on all other subjects but that of religion, there is scarcely any imposture of this character, however absurd or monstrous [column 3] it may be, that has ever been introduced into the world, but what has had its supporters and made its proselytes. And we have little doubt that were a person now to appear on the stage and assert that he had been an inhabitant of the moon for five hundred years, and had finally fallen on this earth to make a new revelation to men, he would find followers and make proselytes, who would be fools enough to believe and profess faith in his new theory. So prone are mankind to the marvelous in religion, when backed, as in this case, by the threats of endless misery!