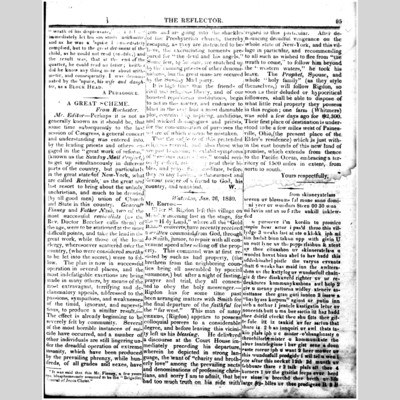 Elder S. Rigdon left this village on Monday morning last in the stage, for the “Holy Land,” where all the “Gold Bible” converts, have recently received a written command from God, through Jo Smith, junior, to repair with all convenient speed after selling off the property.

This command, was at first resisted by such as had property, (the brethren from the neighboring counties being all assembled by special summons,) but after a night of fasting, prayer and trial, they all consented to obey the holy messenger.—Rigdon has for some time past been arranging matters with Smith for the final departure of the faithful for the “far west.” This man of many CREEDS, (Rigdon) appears to possess colloquial powers to a considerable degree, and before leaving this vicinity left us his blessing. He delivered a discourse at the Court House immediately preceding his departure, wherein he depicted in strong language, the want of “charity and brotherly love” among the prevailing sects and denominations of professing christians, and sorry I am to admit, that he had too much truth on his side with regard to this particular. After denouncing dreadful vengeance on the whole state of New-York, and this village in particular, and recommending to all such as wished to flee from “the wrath to come,” to follow him beyond the “western waters,” he took his leave. The Prophet, Spouse, and whole “holy family” (as they style themselves,) will follow Rigdon, so soon as their deluded or hypocritical followers, shall be able to dispose of what little real property they possess in this region; one farm (Whitmers) was sold a few days ago for $2,300. Their first place of destination is understood to be a few miles west of Painesville, Ohio, (the present place of the Elder’s residence) which is just within the east bounds of this new land of promise, which extends from thence to the Pacific Ocean, embracing a territory of 1500 miles in extent, from north to south. Yours respectfully, —