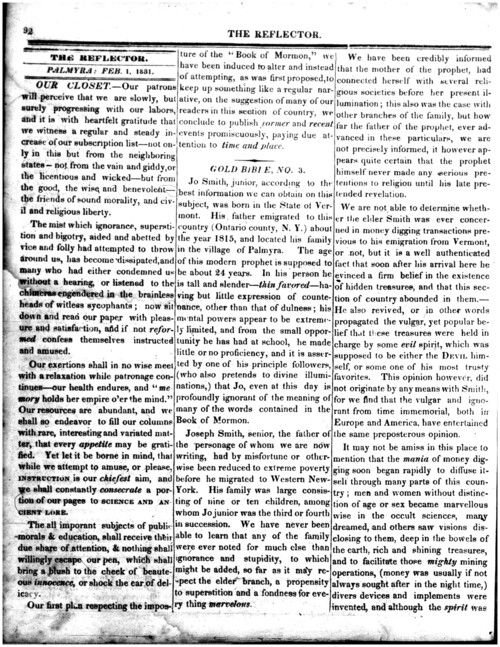 Jo Smith, junior, according to the best information we can obtain on this subject, was born in the State of Vermont. His father emigrated to this country (Ontario county, N.Y.) about the year 1815, and located his family in the village of Palmyra. The age of this modern prophet is supposed to be about 24 years. In his person he is tall and slender— thin favored—having but little expression of countenance, other than that of dulness; his mental powers appear to be extremely limited, and from the small opportunity he has had at school, he made little or no proficiency, and it is asserted by one of his principle followers, (who also pretends to divine illuminations,) that Jo, even at this day is profoundly ignorant of the meaning of many of the words contained in the Book of Mormon.

Joseph Smith, senior, the father of the personage of whom we are now writing, had by misfortune or otherwise been reduced to extreme poverty before he migrated to Western New-York. His family was large consisting of nine or ten children, among whom Jo junior was the third or fourth in succession. We have never been able to learn that any of the family were ever noted for much else than ignorance and stupidity, to which might be added, so far as it may respect the elder branch, a propensity to superstition and a fondness for everything marvelous.

We have been credibly informed that the mother of the prophet, had connected herself with several religious societies before her present illumination; this also was the case with other branches of the family, but how far the father of the prophet, ever advanced in these particulars, we are not precisely informed, it however appears quite certain that the prophet himself never made any serious pretensions to religion until his late pretended revelation.

We are not able to determine whether the elder Smith was ever concerned in money digging transactions previous to his emigration from Vermont, or not, but it is a well authenticated fact that soon after his arrival here he evinced a firm belief in the existence of hidden treasures, and that this section of country abounded in them.—He also revived, or in other words propagated the vulgar, yet popular belief that these treasures were held in charge by some evil spirit, which was supposed to be either the DEVIL himself, or some one of his most trusty favorites. This opinion however, did not originate by any means with Smith, for we find that the vulgar and ignorant from time immemorial, both in Europe and America, have entertained the same preposterous opinion.

It may not be amiss in this place to mention that the mania of money digging soon began rapidly to diffuse itself through many parts of this country; men and women without distinction of age or sex became marvellous wise in the occult sciences, many dreamed, and others saw visions disclosing to them deep in the bowels of the earth, rich and shining treasures, and to facilitate those mighty mining operations, (money was usually if not always sought after in the night time,) divers devices and implements were invented, and although the spirit was [92] always able to retain his precious charge, these discomfited as well as deluded beings, would on a succeeding night return to their toil, not in the least doubting that success would eventually attend their labors.

Mineral rods and balls, (as they were called by the impostor who made use of them,) were supposed to be infallible guides to these sources of wealth—“peep stones” or pebbles, taken promiscuously from the brook or field, were placed in a hat or other situation excluded from the light, when some wizzard or witch (for these performances were not confined to either sex) applied their eyes, and nearly starting their balls from their sockets, declared they saw all the wonders of nature, including of course, ample stores of silver and gold.

It is more than probable that some of these deluded people, by having their imaginations heated to the highest pitch of excitement, and by straining their eyes until they were suffused with tears, might have, through the medium of some trifling emission of the ray of light, receive imperfect images on the retina, when their fancies could create the rest. Be this however as it may, people busied themselves in consulting these blind oracles, while the ground was nightly opened in various places and men who were too lazy or idle to labor for bread in the day time, displayed a zeal and persevereance in this business worthy of a better cause.