The Golden Bible, or the Book of Mormon 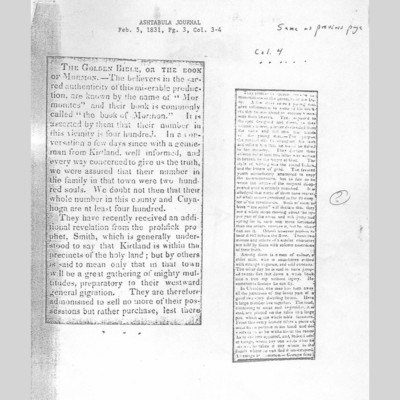 The Golden Bible, or the Book of Mormon.— The believers in the sacred authenticity of this miserable production, are known by the name of “Mormonites,” and their book is commonly called “the book of Mormon.” It is asserted by them that their number in this vicinity is four hundred. In a conversation a few days since with a gentleman from Kirtland, well informed, and every way concerned to give us the truth, we were assured that their number in the family in that town were two hundred souls. We doubt not then, that their whole number in this county and Cuyahoga are at least four hundred.

They have recently received an additional revelation from the prolific prophet, Smith, which is generally understood to say that Kirtland is within the precincts of the holy land; but by other is said to mean only that in that town will be a great gathering of mighty multitudes, preparatory to their westward general migration. They are therefore admonished to sell no more of their possessions but rather purchase, lest there shall not be room for the faithful. The admonition, however, arrived too late, as they have but fifty acres left, and the landholders refuse to sell them.

They profess to receive sensible demonstrations of the presence of the Deity.—A few days since a young man gave information to some of his brethren that he was about to receive a message from heaven. They repaired to the spot designated, and there, as they solemnly assert, a letter descended from the skies and fell into the hands of the young man. The purport was to strengthen his faith and inform him that he would soon be called to the ministry. They declare that their solemn belief that this letter was written in heaven by the finger of God. They style of writing was the round Italian, and the letters of gold. The favored youth immediately attempted to copy the communication, but as fast as he wrote, the letters of the original disappeared until it entirely vanished. It is alleged that some of them have received white stones, promised in the 2d chapter of the Revelations. Such of them as have “the spirit” will declare that they see a white stone moving about the upper part of the room, and will jump and spring for it, until one more fortunate than the other catches it, but he alone can see it. Others however profess to hear it roll across the floor. These two stories, and others of a similar character, are told by them with solemn asseverations of their truth.

Among them is a man of color, a chief man, who is sometimes seized with strange vagaries and odd concerns. The other day he is said to have jumped twenty-five feet down a wash band into a tree top without injury. He sometimes fancies he can fly.

In Chardon, one man has torn away all the partitions of the lower part of a good two-story dwelling house. Here a large number live together. The food consisting of meat and vegetables, it is said, is placed on a table in a large pan, which is the whole table furniture. From this every inmate takes a piece of meant and a potato in his hand, and devours them as he walks about the room.—As to matters or apparel, and indeed other things, where any one wants what he has not, he takes it any where in the family where he can find it unoccupied. All things are common.