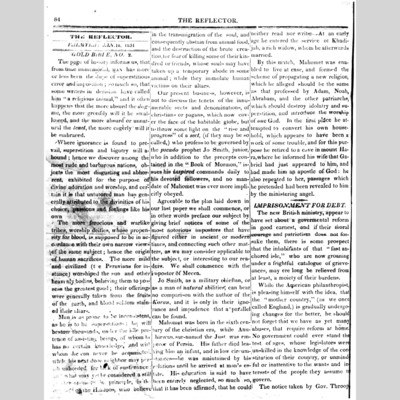 The page of history informs us, that from time immemorial, MAN has more or less been the dupe of superstitious error and imposition; so much so, that some writers in derision have called him “a religious animal,” and it often happens that the more absurd the dogma, the more greedily will it be swallowed, and the more absurd or unnatural the tenet, the more eagerly will it be embraced.

Where ignorance is found to prevail, superstition and bigotry will abound; hence we discover among the most rude and barbarous nations, objects the most disgusting and abhorent, exhibited for the purpose of divine adoration and worship, and certain it is that untutored man has generally attributed to the divinities of his choice, passions and feelings like his own.

The more ferocious and warlike tribes, worship deities, whose propensity for blood, is supposed to be in accordance with their own narrow views of the same subject; hence the origin of human sacrifices. The more mild and civilized (the Peruvians for instance) worshiped the sun and other heavenly bodies, believing them to possess the greatest good; their offerings were generally taken from the fruits of the earth, and blood seldom stained their altars.

Man is as prone to be inconsistent, as he is to be superstitious; he will bestow thousands, under the idle pretense of assisting beings, of whom he has no certain knowledge, and with whom he can never be acquainted, while his next door neighbor may perish unheeded for lack of sustenance; and what may yet be considered a still greater anomaly in principle, is the conduct of the Hindoos, who believe in the transmigration of the soul, and consequently abstain from animal food, and the destruction of the brute creation, for fear of killing some of their kindred friends, whose souls may have taken up a temporary abode in some animal; while they immolate human victims on their altars.

Our present business, however, is not to discuss the tenets of the innumerable sects and denominations, of christians or pagans, which now cover the face of the habitable globe, but to throw some light on the “rise and progress” of a sect, (if they may be called so,) who profess to be governed by the pseudo prophet Jo Smith, junior, who in addition to the precepts contained in the “Book of Mormon,” issues his inspired commands daily to his devoted followers, and no mandate of Mahomet was ever more implicitly obeyed.

Agreeable to the plan laid down in our last paper we shall commence, or in other words preface our subject by giving brief notices of some of the most notorious impostors that have figured either in ancient or modern times, and connecting such other matters, as we may consider applicable to the subject, or interesting to our readers. We shall commence with the impostor of Mecca.

Jo Smith, as a military chieftan, or as a man of natural abilities, can bear no comparison with the author of the Koran, and it is only in their ignorance and impudence that a parallel can be found.

Mahomet was born in the sixth century of the christian era, while Anashirwan, sur-named the Just was emperor of Persia. His father died leaving him an infant, and in low circumstances—he was maintained by his relations until he arrived at man’s estate. His education is said to have been entirely neglected, so much so, that it has been affirmed, that he could neither read nor write. At an early age he entered the service of Khadijah, a rich widow, whom he afterwards married.

By this match, Mahomet was enabled to live at ease and formed the scheme of propagating a new religion, which he alleged should be the same as that professed by Adam, Noah, Abraham, and the other patriarchs, which should destroy idolatry and superstition, and introduce the worship of one God. In the first place he attempted to convert his own household, which appears to have been a work of some trouble, and for this purpose he retired to a cave in mount Hara, where he informed his wife that Gabriel had just appeared to him, and had made him an apostle of God: he also repeated to her, passages which he pretended had been revealed to him by the ministering angel.