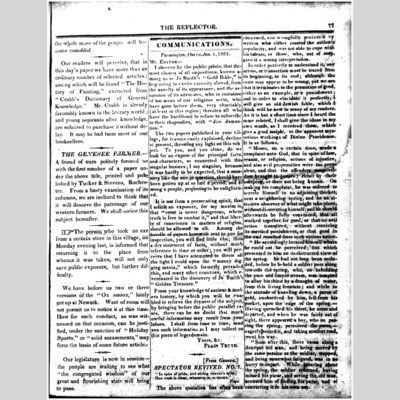 I observe by the public prints, that this most clumsy of all impositions, known among us as Jo Smith’s “Gold Bible,” is beginning to excite curiosity abroad, from the novelty of its appearance, and the assurance of its advocates, who in imitation of too many of our religious sects, who have gone before them, very charitably (at least in this region) threaten all who have the hardihood to refuse to subscribe to their rhapsodies, with “dire damnation.”

The two papers published in your village, for reasons easily explained, decline at present, throwing any light on this subject. To you, and you alone, do we look for an expose of the principal facts, and characters, as connected with this singular busines; I say singular, because it was hardly to be expected, that a mummery like the one in question, should have been gotten up at so late a period, and among a people, professing to be enlightened.

It is not from a persecuting spirit, that I solicit an exposure, for my maxim is, that “error is never dangerous, where truth is free to combat it,” and that liberty of conscience in matters of religion should be allowed to all. Among the bundle of papers herewith sent to you for inspection, you will find little else, than a dry statement of facts, without much reference to time or order; you will perceive that I have attempted to throw all the light I could upon the “money digging mania,” which formerly pervaded this, and many other countries, which eventuated in the discovery of Jo Smith’s “Golden Treasure.”

From your knowledge of ancient & modern history, by which you will be enabled to relieve the dryness of the subject, by bringing before the public parallel cases, there can be no doubt that much useful information may result from your labors. I shall from time to time, send you such information as I may collect on this piece of legerdemain.