“Letter to the Editor” 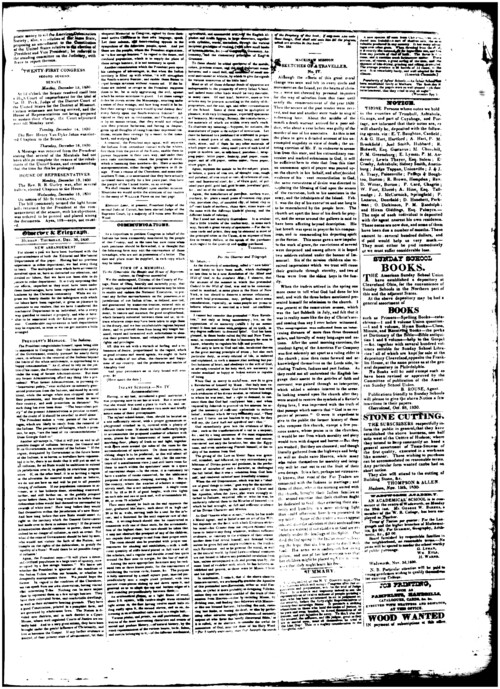 As the discovery of something, called a “new bible” is said lately to have been made, which challenges no less than to be a new Revelation of the Mind and Will of God, to his creature Man, I observe, that the account of the manner in which this pretended Codicil to the Will of God, was said to be communicated to mankind, in some place in the State of New York, is too absurd to deserve a serious refutation; yet such bold pretensions, may, perhaps, merit some consideration, especially, as some people are prone to believe whatever is asserted in a bold and confident manner.

I cannot but consider this pretended “New Revelation,” not only as being unnecessary; but, on the supposition of its necessity (which I by no means grant) it does not come with evidence of its truth in any degree sufficient to demand belief. God has been pleased, in those books called the Old and New Testament, to communicate all that is necessary for man to know, whereby to regulate his faith and practice.

Not only is love to God and man, inculcated therein as the great moving principle of action; but also each particular duty, in every relation of life, is enforced and explained, in such a manner, that nothing but perfect holiness of heart, and obedience to the will of God, as already revealed in his holy word, are necessary to render mankind as happy as human nature is capable of being.

When God in mercy to sinful man, saw fit to give a Revelation of himself to Moses; that holy man very justly objected, unless God would favour him with such evidences of his divine mission, as rational beings, to whom he was sent, had a right to demand, to convince them that God had really sent him; and when required by Jehovah to proceed on his mission he urged the necessity of sufficient credentials to enforce belief; without which he very reasonably said, “They will not believe me nor hearken to my voice, for they will say, the Lord hath not appeared unto thee.”

God immediately gave him the evidence of Miracles; such as the transformation of a rod to a serpent, &c.; and by a long seccession of the most stupendous miracles, addressed both to their reason and senses, convinced not only the Israelites, but also the Egyptians, and even unbelieving Pharaoh himself, of the reality of his mission from God.

The giving of the Law on Mount Sinai was preceded, attended, and followed, by very extraordinary exhibitions of Divine power and goodness, in the performance of miracles of such a character, as challenged the full belief, that it was a revelation from God himself; and rendered unbelief most dreadfully criminal.

When the old Dispensation, which was but a “shadow of good things to come,” gave way for the introduction of the new, through the ministry of Christ and his Apostles, when the Jews, who were strongly attached to Judaism, enquired who or what he was, he uniformly referred them to the Miracles of benevolence which he had wrought, as full and sufficient evidence of his Divine Character and Mission.

As God “knows what is in man,” whom he has made a Moral Agent; and as Belief is not an act of the Will, but depends on the force with which Evidence strikes his mind—his Creator does not require rational creatures to believe any thing whatever, without sufficient evidence, or contrary to the evidence of their senses: neither does God reveal himself, and demand belief, unless he gives full and ample evidence of the truth of such Revelation: and as he governs the moral, as well as the natural world, by fixed Laws—rational creatures are not bound to believe any pretended revelation from him, unless accompanied with, and proven true by, the same kind of evidence with which he has hitherto established and proven, as those were by Moses, Christ and his Apostles.

In conclusion, I remark, that if the above observations are correct, we are bound to consider the Apostles of this pretended new Revelation, either as wild Fanatics, or (what is more probable) as designing Villains, unless they can convince mankind of the truth of their mission from Heaven—either by imitating Moses, by dividing seas, and feeding their followers with Manna—or like our blessed Saviour, by healing the sick, restoring lost limbs, or raising the dead; or else by performing other miracles equally stupendous. I earnestly entreat all who favor this `newly discovered Bible,' as it is called, or its abettors, to consider the awful denunciation of God, near the close of his Holy Word: “For I testify unto every man that heareth the words of the Prophecy of this book: If any man ADD unto these things, God shall add unto him all the plagues which are written in this book!” H.