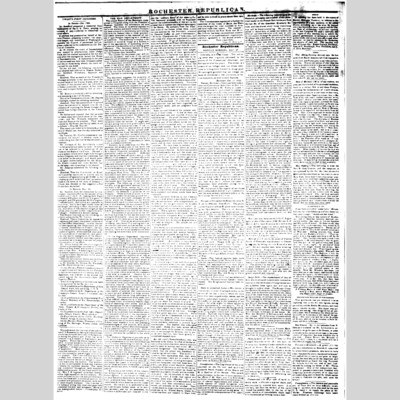 Book of Mormon.— Most of our readers, we presume, have heard of this pretended revelation, made to a certain few in and about Palmyra, revealing the fundamentals of a new religion. A ridiculous story was told about its discovery, golden plates were found in a stone box, a Mr. Somebody who could neither read nor write, was found able to translate them, and somebody else, equally ignorant, to transcribe them, and a worthy, honest but credulous farmer was found willing to be ruined by defraying the expense of publishing, and the Book of Mormon, as was to be expected, fell dead-born from the press. Here it was supposed the matter would rest, without causing even a sneer at the expense of the revelators. This however seems not to be the case. The disciples of Mormon have recently appeared in Ohio, and are propagating their new light with extraordinary rapidity, gulling the credulous, and laying the foundations broad and wide for a “New Jerusalem” about to be built; and now it seems the oracle has commenced its responses nearer home. Surely it was not rightly said that “in that hour the Heathen oracles became dumb for ever.” On Thursday of last week one of these seers of Mormon appeared in Canandaigua, delivered a discourse, and avowed his full belief that the book is a revelation from God, and of equal authenticity with the Old and New Testament. What number of hearers he had we are not informed, but for the honor of intelligent man, we hope and trust his followers are and will be, “few and far between.” This matter must be the ne plus ultra of fanaticism and delusion.

If men will go beyond this in belief, verily there can be no end to their credulity.