The Book of Gold 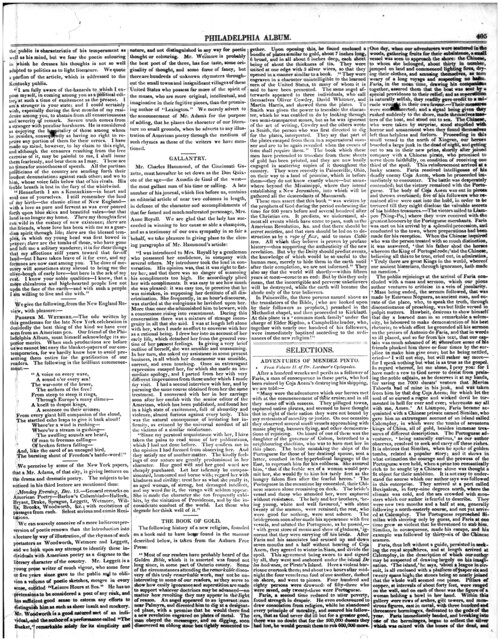 THE BOOK OF GOLD.

The following history of a new religion, founded on a book said to have been found in the manner described below, is taken from the Auburn Free Press:

“Most of our readers have probably heard of the Golden Bible, which it is asserted was found not long since, in some part of Ontario county. Some of the circumstances attending the remarkable discovery of this truly remarkable work, may not be uninteresting to some of our readers, as they serve to show how easily ignorance and superstition are made to support whatever doctrines may be advanced—no matter how revolting they may appear in the light of reason. An angel appeared to an ignorant man near Palmyra, and directed him to dig at a designated place, with a promise that he would there find a new revelation engraved on plates of metal. The man obeyed the messenger, and on digging, soon discovered an oblong box tightly cemented together. Upon opening this, he found enclosed a bundle of plates similar to gold, about 7 inches long, 6 broad, and in all about 6 inches deep, each sheet being of about the thickness of tin. They were united, at one edge with 3 silver wires, so that they opened in a manner similar to a book. “They were engraven in a character unintelligible to the learned men of the United States, to many of whom it is said to have been presented. The same angel afterwards appeared to three individuals, who call themselves Oliver Cowdry, David Whitmer, and Martin Harris, and showed them the plates. To Smith was given the power to translate the character, which he was enabled to do by looking through two semi-transparent stones, but as he was ignorant of the art of writing, Cowdry and the others wrote as Smith, the person who was first directed to dig for the plates, interpreted. They say that part of the plates escaped from them in a supernatural manner and are to be again revealed when the events of time shall require them.” The book which these men have pretended to translate from these sheets of gold has been printed, and they are now busily engaged in scattering copies of it throughout the country. They were recently in Painesville, Ohio, on their way to a land of promise, which is before them—they do not know exactly where—but somewhere beyond the Mississippi, where they intend establishing a New Jerusalem, into which will be gathered all the descendants of Mannassah.

These men assert that this book “was written by the prophets of God during the period embracing the time for 600 years before and several hundred after the Christian era. It predicts, we understand, almost all events which have come to pass, such as the American Revolution, &c. and that there should be secret societies, and that men should be led on to destruction as by a rope of flax, said to mean Cable tow. All which they believe is proven by profane history—thus supporting the authenticity of the new revelation. But why the Deity should predict events, the knowledge of which would be so useful to the human race, merely to hide them in the earth until after their completion, we are not informed.” They also say that the world will shortly—within fifteen years at most—come to an end: But by this they only mean, that the incorrigible and perverse unbelievers will be destroyed, while the earth will become the abode only of the true believers.

In Painesville, the three persons named above as the translators of the Bible, (who are looked upon by their followers as prophets,) preached in the Methodist chapel, and then proceeded to Kirkland. At this place is a “common stock family” under the charge of Elder Rigdon, a Campbellite leader, who, together with nearly one hundred of his followers, were immediately baptized according to the ordinances of the new religion!”