The Jesuit or Catholic Sentinel 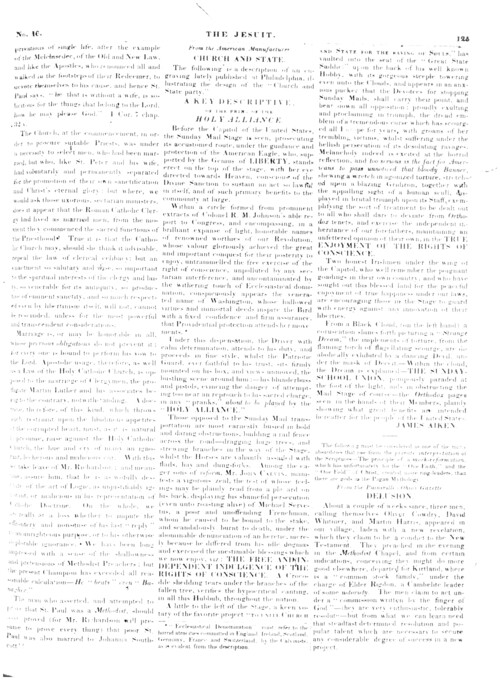 The following must be considered as one of the many absurdities that rise from the private interpretation of the Scriptures—The principle of a mock reformation, which has unfortunately for the “One Faith,” and the “One Fold” of Christ, created, more ring-leaders, than there are gods to the Pagan Mythology.

From the Painsville, Ohio, Gazette

About a couple of weeks since, three men, calling themselves Oliver Cowdry, David Whitmer, and Martin Harris, appeared in our village, laden with a new revelation, which they claim to be a condict to the New Testament. They preached in the evening in the Methodist Chapel, and from certain indications, conceiving they might do more good elsewhere, departed for Kirtland, where is a “common stock family,” under the charge of Elder Rigdon, a Cambelite leader of some notoriety. The men claim to act under a “commission written by the finger of God”-they are very enthusiastic, tolerably resolute—but from what we can learn need that steadfast determined resolution and popular talent which are necessary to secure any considerable degree of success in a new project. The account which they give is substantially as follows:—At a recent period, an angel appeared to a poor ignorant man residing in, or near Palmyra, in Ontario county, in the State of New-York, and directed him to open the earth at a place designated, where he would find the new revelation engraved on plates of metal. In obedience to the celestial messenger, Smith repaired to the spot, and on opening the ground, discovered an oblong stone box, tightly closed with cement. He opened the sacred depository, and found enclosed a bundle of plates resembling gold, carefully united at one edge with three silver wires, so that they opened like a book. The plates were about seven inches long and six broad, and the whole pile was about seven inches long and six broad, and was about six inches deep; each plate about the thickness of tin. They were engraved in a character unintelligible to the learned men of the United States, to many of whom it is said they have been presented. The angel afterwards appeared to the three individuals, and showed them the plates. To Smith was given to transcribe the character which he was enabled to do by looking through two semi-transparent stones, but as he was ignorant of the writing, Cowdry and others wrote as Smith interpreted. They say, that part of the plates escaped from them in a supernatural manner, and are again to be revealed when the events of time shall require them.

The three individuals above named, have subscribed their names to an article in the book, in which they solemnly declare, that they saw an angel, and that he assured them that the book was a divine revelation. They say it was written by the prophets of God during the period embracing the time of 600 years before, and several hundred after, the Christian era. It predicts, we understand, almost all events which have come to pass, such as the American Revolution, &c.

These men are believed by their followers to be prophets—and they say that the world is soon to come to an end—within fifteen years at longest.

By the word coming to an end, they only mean that the incorrigible will be cut off by a variety of means, leaving only the true believers. They have now gone west for a country they know not where, west of the Mississippi, where they say is the Holy Spot, and there they are to establish a new Jerusalem, into which they say will be gathered all the natives, who they say are the descendants of Manasseth. They are led by the spirit, and will know the ground when they place their feet on it.

Immediately after their arrival here, Elder Rigdon embraced the new doctrine, and was baptized for the third time—once, as a regular Baptist—once, as a Campbelite—and now, as a disciple of the new revelation! He says he has hitherto, ignorantly, preached heresy. His flock, we understand, have principally followed their shepherd, and some for the third time, have gone down into the water. We are told that the number baptized into the new order, is upwards of one hundred.