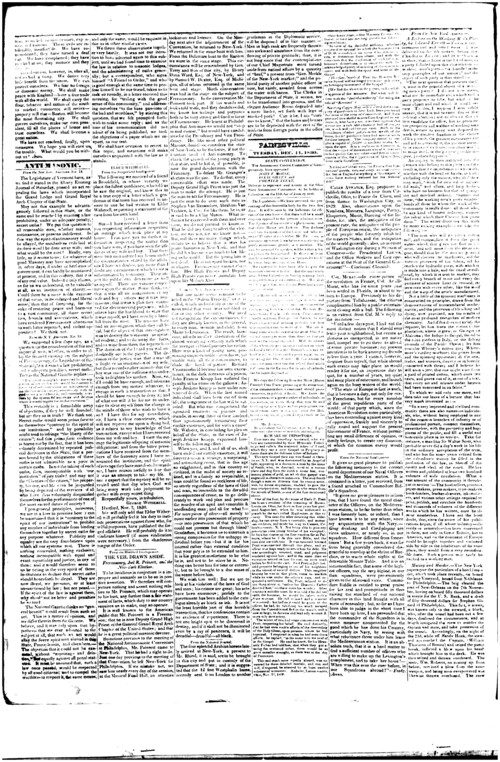 We copy the following from the Milan (Huron County) Free Press, promising at the same time, if the statements therein contained should prove erroneous, to publish it freely. We know the sensitiveness of a great number of individuals in this section, on every thing that may be said touching the new Bible and its propogators, many of whom view it as a sin against the Holy Ghost to say aught against Joseph Smith or his apostles.

By publishing the following, you will I presume serve the cause of morality and religion.

Four men are travelling westward, who say they are commanded by their Heavenly Father, to go and collect the scattered tribes of Israel, which they say a new Gospel or Prophecy informs them are the different tribes of Indians.

This new Gospel they say was found in Ontario co. N.Y. and was discovered by an Angel of light, appearing in a dream to a man by the name of Smith, who, as directed, went to a certain place and dug from the earth a stone box, containing plates of gold, on which this gospel was engraved in characters unknown. The said Smith though a man so illiterate that he cannot write, was, by divine inspiration, enabled to give the true interpretation, and the man who wrote from the mouth of Smith, is one of the four mentioned above.

One of the four, by the name of Parly P. Pratt has been a resident of the township of Russia, Lorain co. Ohio, for three or four years last past, until August last, when he was authorised to preach by the sect called Rigdonites, in this vicinity. The next day after receiving this eldership, he ran away from a constable, and numerous creditors, and made his way to Canaan, Columbia county, N.Y. Not being able to gain any proselytes (one young brother of his excepted), he lays his course up the Erie canal as far as Palmyra, where he finds this new Bible, and the men that are with him. It was rumored that said Pratt was expected through this place, and an officer was kept ready to arrest him for debt. He was accordingly arrested, tried, and judgment rendered against him: and at the same time an execution served on him for cost, on suits tried before he fled to the east. Said Pratt in July last, sold property belonging to one of his neighbors to the amount of several dollars. This neighbor hearing he was in this place, came to see him while he was under the officer's care, and requested a settlement. He, Pratt, refused to do any thing about it “unless his Heavenly Father directed him,”–(these were his words.) After waiting a suitable time, he was told if he did not settle the business, he would be taken with a State warrant. He still refused and a warrant was issued; but before it could be given to the officer, he had, by falsifying his word, escaped from the Constable and fled to the woods, and is now at large, to deceive and lead silly women & more silly men astray.

The writer of this had some conversation with Pratt, respecting his belief. He said distinctly, that he had seen visible effects of the descending of the Holy Ghost, upon persons whom he had baptized. I enquired in what he had seen these effects, he replied, “in the same way we read of in the Gospel.” He said he knew, for his Heavenly Father had told him, that when they got among the scattered tribes, there would be as great miracles wrought, as there was at the day of Pentecost.

This and much more equally absurd, was advanced by these deluded mortals, and can and will, if required, be attested by at least twelve substantial witnesses. Amherst, Lorain county, Ohio, Nov. 26, 1830.