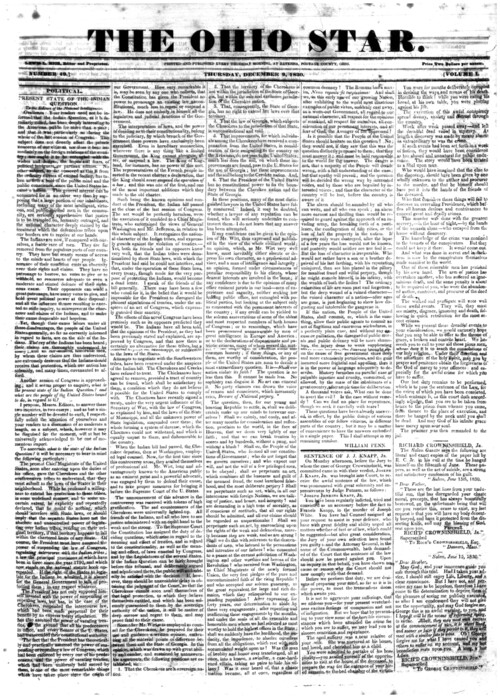 In the Fall of 1827, a man named Joseph Smith of Manchester, Ontario county, N.Y. reported that he had three times been visited in a dream, by the spirit of the Almighty, and informed that in a certain hill in that town, was a Golden Bible, containing an ancient record of a divine nature and origin. On going to the spot he found buried the Bible with a huge pair of spectacles: The leaves (he said, tho' he was not permitted to shew them) were plates of gold, about 8 inches long, 6 wide, and 1-8th of an inch thick, on which were engraved characters or hieroglyphicks, which with the spectacles he could interpret. Martin Harris an industrious farmer, caught the contagion, took some of the characters to different learned men to translate, but without success. He returned, set Smith to work at translating it, and has had it printed.

About two weeks since, Oliver Cowdry, David Whitmer, and Martin Harris, arrived at Painesville Ohio, with the Books. In the evening they preached in the Methodist Chapel, claiming to act under a commission written by the finger of God. They appear very enthusiastic, and predict the end of the world in 15 years, when all but true believers will be destroyed. They then proceeded to Kirtland, where they held forth, and elder Rigdon, formerly a baptist, and latterly a Campbellite, joined them, as did several of his congregation, and were baptized. The three men above named have now gone west of the Mississippi, where they say is a holy spot, and there they are to establish a New Jerusalem, into which will be gathered all the Natives who they say are descendants of Manasseh. They say they are led by the spirit and will know the ground when they place their feet on it.

The book is entitled “The Book of Mormon: An account written by the hand of Mormon, upon plates taken from the plates of Nephi.” It contains the 1st and 2d book of Nephi; book of Jacob; of Joram; of Mormon; of Moriah; of Alma; of Helama; of Nephi, the son of Helaman; of Nephi the son of Nephi; of Ether; and book of Moroni, the last contains the form of service, mode of initiation, prayers &c. It is, doubtless, one of the veriest impositions of the present day.