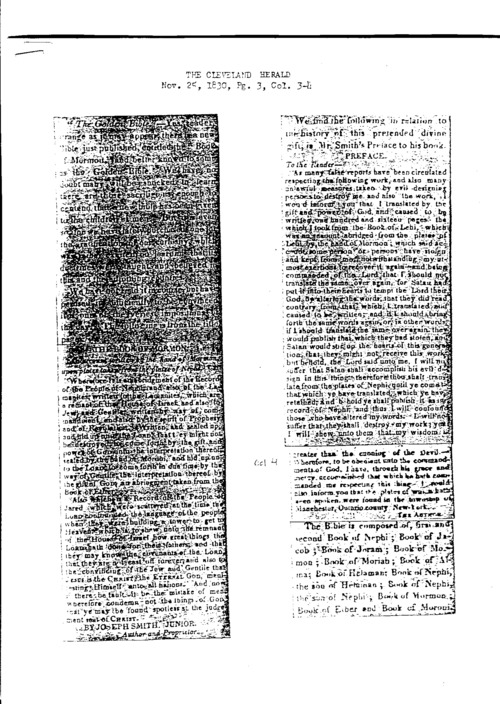 “The Golden Bible. ”—Yes, reader strange as it may appear, there is a new Bible just published, entitled the “Book of Mormon,” and better known to some as the Golden Bible. We have no doubt many will be shocked to learn there are those sacriligious enough to contend that a new bible has been given to the children of men. But it is even so, for we have lately purchased one for the gratification of our curiosity, which was rather excited on learning that its doctrines were taught and believed in this and the adjoining counties.

We have not read it in course, but have perused it sufficiently to be convinced it is one of the veriest impositions of the day. . . .

The last book appears to have been added as a sort of appendix, and contains the form of se vice, mode of eneciation, prayers, &c.

This bible is closed by two certificates commending the work: to the first is attached the name of Oliver Cowdry and two other persons, and to the last are eight names, among which are those of the father and two brothers of the reputed author.

On reading the name of Oliver Cowdry, in support of the divine authenticity of the work, whatever faith we might have been inspired with on reading the certificate, was banished, for we had known Cowdry some seven or eight years ago, when he was a dabbler in the art of Printing, and principally occupied in writing and printing pamphlets, with which, as a pedestrian Pedlar he visited the towns and villages of western New-York and Canada, and the only opinion we have of the origin of this Golden Bible is, that Mr. Cowdry and Mr. Smith the reputed author, have taken the old Bible to keep up a train of circumstances, and by altering names and language have produced the string of Jargon called the “Book of Mormon,” with the intention of making mony by the sale of their Books; and being aware that they would not sell unless an excitement and curiosity could be raised in the public mind, have therefore sent out twelve Apostles to promulgate its doctrines, several of whom are in this vicinity expounding its mysteries [sic] and baptising converts to its principles, whose labors, we understand are principally blest among the superstitious and ignorant or hypocritical, presenting a new proof that all fools are not dead, and knavery in any garb may, yet find votaries.