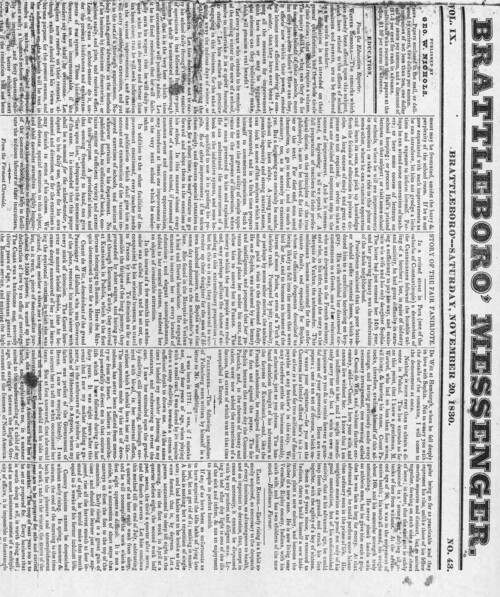 Mr. Editor,—I have gotten some additional information respecting the Book of Mormon, which I send you for insertion in your paper, if you see fit. It is contained in an extract, which I have just taken from a letter, written from a town in the State of New York, where, as I had been previously told, this Jos. Smith has resided some years, and from which he set out, with an attendant, in pursuit of the gold plates,.which he found, as they say, about one hundred and fifty miles from the place of starting. The letter is dated Oct. 18th, 1830, and the extract is as follows:

“You have probably heard of the Gold Bible taken from the earth by Joseph Smith, the money-digger. This he has translated from the Egyptian reformed language to English, by a pair of stone spectacles (provided by an angel) and a dark hat before his eyes. The books have been printed, and J. S. and Mr. N—s are engaged in peddling the same. The society are increasing.

Eighteen have been baptized in a day. H. P. and wife have been baptized, & are very strong in the faith. The girls are under conviction. The leaders pretend to cast out devils and work miracles, heal the sick, &c. We have seen none of their miracles here, except N. N. I heard say in meeting, that he had had the devil cast out.”

I just add, that I have been almost in contact with these peddlers in different parts of this county, having my information from them only through most credible second hand informers, who state that they said, they knew the book, and the manner in which it is said to have been found, was true; or that they did not believe it, but knew it. They are said to be respectable men.

The wife of one of them, though immersed formerly by an Elder in this county, has been immersed or baptized again into this new system. I only state facts, and leave the judicious and pious to their own reflections.

P. S. There was a little error in the former piece. You mistook my L for an S in the word Lamanites.