The Golden Bible, or, Campbellism Improved

Observer and Telegraph S., A. 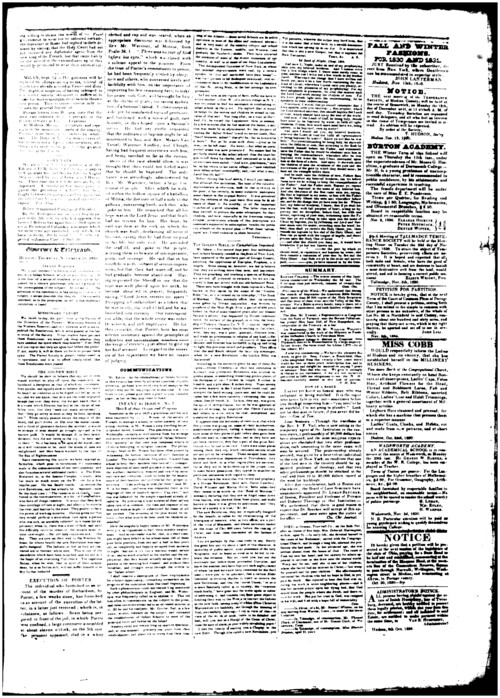 THE GOLDEN BIBLE, or, Campbellism Improved.

Mr. Isham.—For several days past, four individuals, said to have formerly resided in the State of New-York, have appeared in the northern part of Geauga County, assuming the appellation of Disciples, Prophets, and Angels. Some among us, however, are led to believe that they are nothing more than men, and impostors. They are preaching and teaching a species of Religion we are not all prepared to embrace; for we are convinced it does not accord with our old-fashioned Bible.

These men have brought with them copies of a Book, known in this region by the name of the "Golden Bible," or, as it is learned on its title-page, "The Book of Mormon." They solemnly affirm, that its contents were given by Divine inspiration; was written by prophets of the Most High from a period of 600 years before, to that of some hundred years after our blessed Saviour's advent; was deposited by Divine command below the surface of the ground, in or near the township of Palmyra, Ontario Co. N. Y.; that an Angel appeared to a certain Joseph Smith residing in that place, who, they say, was a poor, ignorant, illiterate man, and made no pretensions to religion of any kind;—[original text illegible] . . . of this sacred deposit, and directed him forthwith to dig up and bring to light this precious record and prophecy. They affirm that the said Smith obeyed the heavenly messenger, when lo! a new Revelation—the Golden Bible was discovered!

According to the narrative given by one of these disciples—Oliver Cowdery—at their late exhibition in Kirtland, this pretended Revelation was written on golden plates, or something resembling golden plates, of the thickness of tin—7 inches in length, 6 inches in breadth, and a pile about 6 inches deep. None among the most learned in the United States could read, and interpret the hand-writing, (save one, and he could decipher but a few lines correctly,) excepting this ignoramus, Joseph Smith, Jr. To him, they say, was given the spirit of interpretation; but he was ignorant of the art of writing, he employed this Oliver Cowdery and others to write, while he read, interpreted, and translated this mighty Revelation.

It appears from the testimony of these men, that while this process was going on, some of their mischievous, meddlesome neighbors, having a miserly disposition, stole some of their plates of gold before they gave them sufficient time to translate them, and as they have not yet been recovered, they fear a part of this great Revelation will be lost to our race. There were other plates among them, they say, which contained secrets which are not yet to be revealed. These escaped from them by some mysterious dispensation of Providence, they know not how, or in what region they are secreted, but as they are to be forthcoming at the proper time, to some future generation, they appear to manifest no particular uneasiness with regard to them.

To convince the world that this record and prophecy is a Divine Revelation, three men, Oliver Cowdery, David Whitmer and Martin Harris, have subscribed their names to an article in this "Book of Mormon," solemnly declaring that they saw an Angel come down from heaven, who showed them those plates, and made known to them it was given by inspiration, and "they know of a surety it is true," &c. &c.

This new Revelation, they say is especially designed for the benefit, or rather for the christianizing of the Aborigines of America; who, as they affirm, are a part of the tribe of Manasseh, and whose ancestors landed on the coast of Chili 600 years before the coming of Christ, and from them descended all the Indians of America.

You are, perhaps, by this time ready to say, Surely this great hue and cry about a book of this character, in unworthy of public notice; none possessed of the holy Scriptures, will be found so weak as to be led to embrace this delusion. But sir, could you but see the multitude that follow those pretended Disciples, and know the number they have baptized each night, (many of whom 'tis said have now been immersed for the third time;) were you to be informed, that a certain Elder hesitated in deciding whether to reject or receive the new Revelation, and that the "social Union," or as it is more familiarly called in its vicinity, the "common stock family," have gone into the water again in token of embracing it; and consider that their great object in bending their way to the West is to convert the Indians to the new faith, among many of whose tribes Christian Missionaries are faithfully, and through the blessing of God, successfully laboring,—I say in view of this—in view of the worth of souls, liable to be deluded and lost, will you not as a Herald of the Cross of Christ, raise the note of alarm, in your widely circulating paper?

I take the liberty of sending you a Chapter in the new Bible. Though it be called a new Revelation, you will perceive, whoever the author may have been, that it is the same that is held forth by a certain denomination which has sprung up in our day. It is maintained that this is not a new Gospel, but that it explains the New Testament. Yours, &c. A. S.

And now, I, Nephi, make an end of my prophesying unto you, my beloved brethren. And I cannot write but a few things which I know must surely come to pass, neither can I write but a few words of my brother Jacob. Wherefore, the things which I have written, sufficeth me, save it be a few words concerning the doctrine of Christ; wherefore, I shall speak unto you plainly, according to the plainness of my prophesying. For my soul delighteth in plainness: for after this manner doth the Lord God work among the children of men. For the Lord God giveth light unto the understanding: for he speaketh to their language, unto their understanding.

Wherefore, I would that ye should remember that I have spoken unto you, concerning that prophet which the Lord showed unto me, that should baptize the Lamb of God, which should take away the sins of the world.

And now, if the Lamb of God, he being holy, should have need to be baptized by water, to fulfil all righteousness, O then, how much more need have we, being unholy, to be baptized, yea, even by water.

And now I would ask of you, my beloved brethren, wherein the Lamb of God did fulfil all righteousness in being baptized by water? Know ye not that he was holy? But notwithstanding he being holy, he showeth unto the children of men, that according to the flesh he humbleth himself before the Father, and witnesseth unto the Father that he would be obedient unto him in keeping the commandments; wherefore after that he was baptized with water, the holy Ghost descended upon him in the form of a dove. And again: it sheweth unto the children of men the straitness of the path and the narrowness of the gate, by which they should enter, he hath set the example before them.

And he saith unto the children of men, Follow thou me. Wherefore, my beloved brethren, can we follow Jesus, save we shall be willing to keep the commandments of the Father? And the Father saith, Repent ye, repent ye, and be baptized in the name of my beloved Son. And also, the voice of the Son came unto me saying, He that is baptized in my name, to him will the Father give the Holy Ghost, like unto me; wherefore, follow me, and do the things which ye have seen me do. Wherefore, my beloved brethren, I know that if ye shall follow the Son, with full purpose of heart, acting no hypocrisy and no deception before God, but with real intent, repenting of your sins, witnessing unto the Father that ye are willing to take upon you the name of Christ, by baptism; yea, by following your Lord and Saviour down into the water, according to his word; behold, then shall ye receive the Holy Ghost; yea, then cometh the baptism of fire and of the Holy Ghost; and then can ye speak with the tongues of Angels, and shout praises unto the Holy One of Israel. * * *— and after this, should you deny me, it would have been better if ye had not known me.

* * * —for the gate by which ye should enter, is repentance, and baptism by water, and then cometh a remission of your sins by fire, and the Holy Ghost. And then are ye in this strait and narrow path —yea, ye have entered in by the Gate.