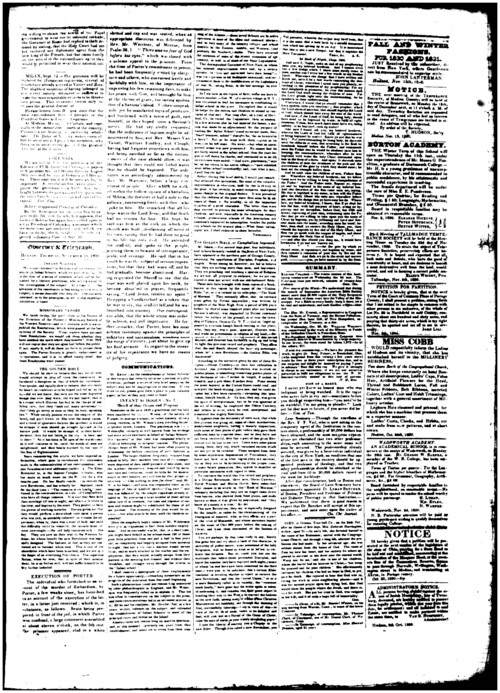 THE GOLDEN BIBLE We should be slow to believe that any set of men would accept to play off upon the community, so barefaced a deception as that which our correspondent speaks; and equally slow to believe, that any could be found so credulous as to be duped and led astray by it,—did we not know, that men are the same depraved beings that ever they were; did we not know, that it is a crime which Heaven has laid to the charge of our fallen race, that they “seek out many inventions”—that “they go astray as soon as they be born speaking lies.” While unruly passion sways the empire of the heart, and guilt draws its film over the moral vision, and a cloud of ignorance darkens the intellect, it would be strange if men should go straight forward in the narrow path. It would be strange if, in their bewilderment, they did not listen to the cry, “lo here, and lo there.” So it has been in all ages of the world—and so it will continue to be, until the minds of men are enlightened, and their hearts warmed by the rays of the Sun of Righteousness.

Since commencing this article, we have received information, which goes to corroborate the statements made in the communication of our correspondent, and also furnishes several additional particulars. The Elder referred to, is the famous Campbellite leader, who has made so much noise on the Reserve for a few months past. He has finally concluded to receive the new Revelation, and has actually been baptized, (now for the third time.) “The common stock family” mentioned in the communication, is a club of Campbellites, who have all things common. It is said that they hold their meetings till late at night, and afterwards retire to the river, and baptize by the score. They profess to have the power of working miracles. Having given out that they would perform a miraculous cure upon a person who was sick, an assembly collected to witness the experiment, when lo, there was a want of faith, and until this difficulty could be removed, the miracles must remain unwrought;—the old lady continues sick to this day. They are now on their way to the Western Indians, for whose benefit the new Revelation was especially designed. The Indians, as fast as they are converted are to become white men. This is one of the absurdities which have been broached, and we see in it the finger of an overruling Providence. The sagacious Indian, when he sees, that in spite of their incantations, he is an Indian still, will not suffer himself to be any further befooled.