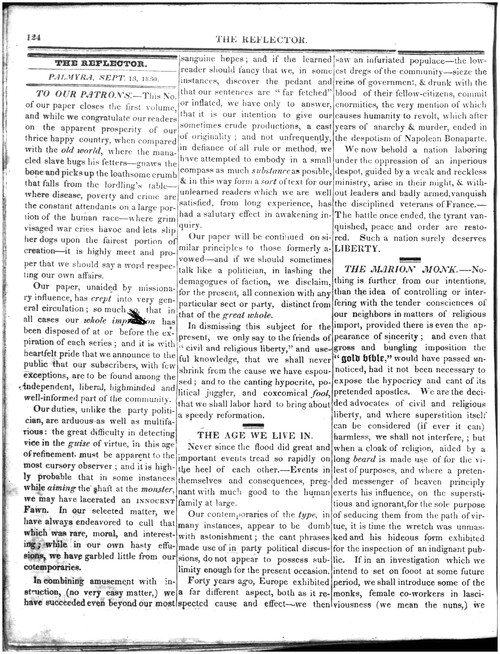 THE MARION MONK— Nothing is further from our intentions, than the idea of controlling or interfering with the tender consciences of our neighbors in matters of religious import, provided there is even the appearance of sincerity; and even that gross and bungling imposition the “gold bible,” would have passed unnoticed, had it not been necessary to expose the hypocricy and cant of its pretended apostles. We are the decided advocates of civil and religious liberty, and where superstition itself can be considered (if ever it can) harmless, we shall not interfere,; but when a cloak of religion, aided by a long beard is made use of for the vilest of purposes, and where a pretended messenger of heaven principly exerts his influence, on the superstitious and ignorant, for the sole purpose of seducing them from the path of virtue, it is time the wretch was unmasked and his hideous form exhibited for the inspection of an indignant public. If in an investigation which we intend to set on fooot at some future period, we shall introduce some of the monks, females co-workers in lasciviousness (we mean the nuns,) we[124] hope no half literary poppinjay will accuse us of being inimical to the cause of virtue.