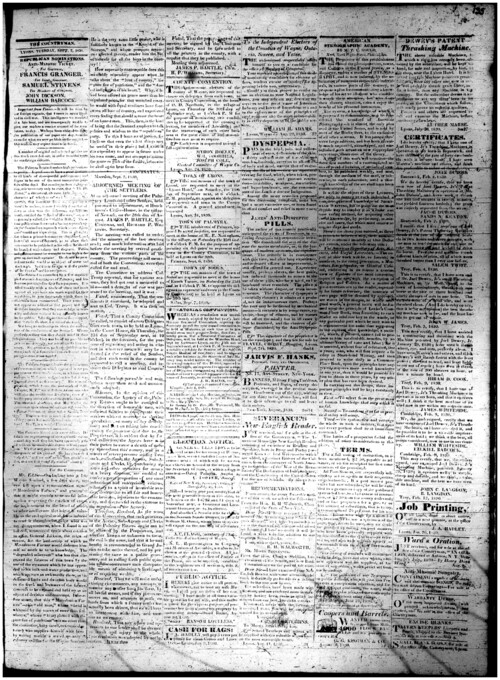 The Palmyra Sentinel makes high pretensions to purity. It professes to have a great aversion to all kinds of disrespectful publications; and feigns to be one of the most immaculate journals of the day! But in order to show its hypocrisy, it is necessary only to state, that. “The Reflector,” a sarcastical, obscene little paper, the character of which is so well known in this quarter, that comment from us, respecting it, would be useless, is issued weekly from that office; as also was the infamous, catch-penny work, entitled the “Book of Mormon, ” or, as it is generally called, the “Golden Bible.” These two publications have cast a lasting reproach upon the Sentinel–a reproach which years of penance would not wipe away. This is all right; for when a printer becomes so abandoned, and lost to all sense of decency, as to allow such nuisances to be published in his office, he should be branded with infamy and disgrace. Public indignation cannot be wrought to too high a degree against such a printer. He should be pointed out to the world as an object of scorn and contempt. And this is the case with the printer of the Sentinel and his coadjutors.

The Sentinel is controlled by a few unprincipled masonic demagogues of Palmyra; and has become prostituted to their base purposes. It is filled weekly with a tirade of abuse and insult against all who have too much regard for their reputation, to join the crusade which these individuals have commenced. Their names do not appear as editors of that paper; and they therefore imagine that they can indulge in scurrility and abuse without being generally known to the public. Like the institution they support, they “strike the blow, but conceal the hand. ”

We have no inclination to check the mad career of the conductors of the Sentinel. We are perfectly willing that they should revel in their abominations. They can be of no possible injury to anti-masonry; nor advantage to free-masonry. So, gentlemen, push on with your un-envied task defamation–you shall meet with no opposition at our hand!