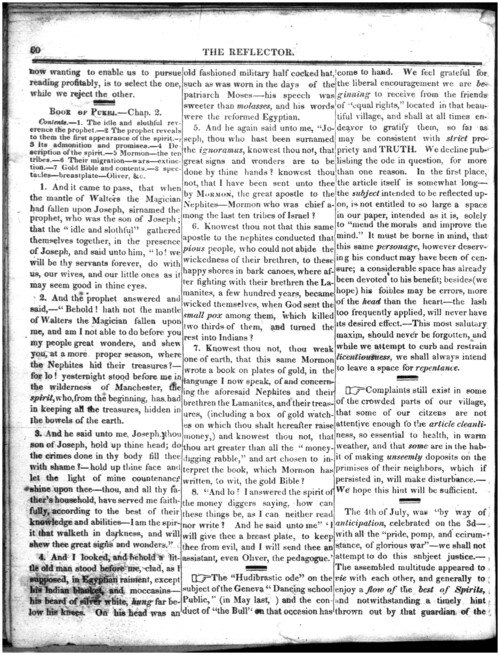 Contents.—1. The idle and slothful reverence the prophet.—2 The prophet reveals to them the first appearance of the spirit.—3 Its admonition and promises.—4 Description of the spirit.—5 Mormon—the ten tribes.—6 Their migration—wars—extinction.—7 Gold Bible and contents.—8 spectacles-breastplate-Oliver, &c.

1. And it came to pass, that when the mantle of Walters the Magician had fallen upon Joseph, sirnamed the prophet, who was the son of Joseph; that the “idle and slothful” gathered themselves together, in the presence of Joseph, and said unto him, “lo! we will be thy servants forever, do with us, our wives, and our little ones as it may seem good in thine eyes.

2. And the prophet answered and said,–“Behold! hath not the mantle of Walters the Magician fallen upon me, and am I not able to do before you my people great wonders, and shew you, at a more proper season, where the Nephites hid their treasures?—for lo! yesternight stood before me in the wilderness of Manchester, the spirit, who, from the beginning, has had in keeping all the treasures, hidden in the bowels of the earth.

3. And he said unto me, Joseph thou son of Joseph, hold up thine head; do the crimes done in thy body fill thee with shame?—hold up thine face and let the light of mine countenance shine upon thee—thou, and all thy father's household, have served me faithfully, according to the best of their knowledge and abilities—I am the spirit that walketh in darkness, and will shew thee great signs and wonders.”

4. And I looked, and behold a little old man stood before me, clad, as I supposed, in Egyptian raiment, except his Indian blanket, and moccasins—his beard of silver white, hung far below his knees. On his head was an old fashioned military half cocked hat, such as was worn in the days of the patriarch Moses—his speech was sweeter than molasses, and his words were the reformed Egyptian.

5. And he again said unto me, “Joseph, thou who hast been surnamed the ignoramus, knowest thou not, that great signs and wonders are to be done by thine hands? knowest thou not, that I have been sent unto thee by MORMON, the great apostle to the Nephites—Mormon who was chief among the last ten tribes of Israel?

6. Knowest thou not that this same apostle to the nephites conducted that pious people, who could not abide the wickedness of their brethren, to these happy shores in bark canoes, where after fighting with their brethren the Lamanites, a few hundred years, became wicked themselves, when God sent the small pox among them, which killed two thirds of them, and turned the rest into Indians?

7. Knowest thou not, thou weak one of earth, that this same Mormon wrote a book on plates of gold, in the language I now speak, of and concerning the aforesaid Nephites and their brethren the Lamanites, and their treasures, (including a box of gold watches on which thou shalt hereafter raise money,) and knowest thou not, that thou art greater than all the “money-digging rabble,” and art chosen to interpret the book, which Mormon has written, to wit, the gold Bible?

8. “And lo! I answered the spirit of the money diggers saying, how can these things be, as I can neither read nor write? And he said unto me” ‘I will give thee a breast plate, to keep thee from evil, and I will send thee an assistant, even Oliver, the pedagogue.’