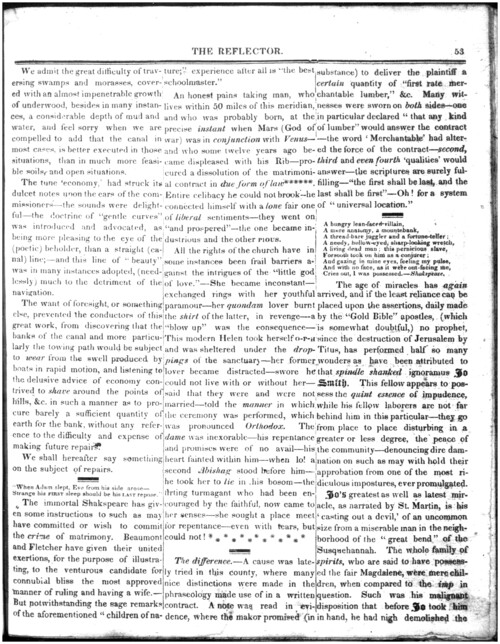 A mere anatomy, a mountebank,

A thread-bare juggler and a fortune-teller;

Forsooth took on him as a conjurer;

And gazing in mine eyes, feeling my pulse,

And with no face, as it were out-facing me,

Cries out, I was possessed.— Shakespeare.

The age of miracles has again arrived, and if the least reliance can be placed upon the assertions, daily made by the “Gold Bible” apostles, (which is somewhat doubtful,) no prophet since the destruction of Jerusalem by Titus, has performed half so many wonders as have been attributed to that spindle shanked ignoramus Jo Smith. This fellow appears to possess the quint essence of impudence, while his fellow laborers are not far behind him in this particular–they go from place to place disturbing in a greater or less degree, the peace of the community– denouncing dire damnation on such as may with hold their approbation from one of the most ridiculous impostures, ever promulgated.

Jo's greatest as well as latest miracle, as narrated by St. Martin, is his “casting out of a devil,” of an uncommon size from a miserable man in the neighborhood of the “great bend” of the Susquehannah. The whole family of spirits, who are said to have possessed the fair Magdalene, were mere children, when compared to the imp in question. Such was his malignant disposition that before Jo took him in hand, he had nigh demolished the [53] frail tenement which had for a long time afforded him a comfortable shelter– the flesh was “about to cleave from the bones”–the muscles, tendons, &c. could no longer perform their different functions–the habitation of Satan, was about to be laid open to the light of day, when the prophet interfered– went to prayer–the demoniac had faith–the devil was routed, and nature resumed her accustomed order.