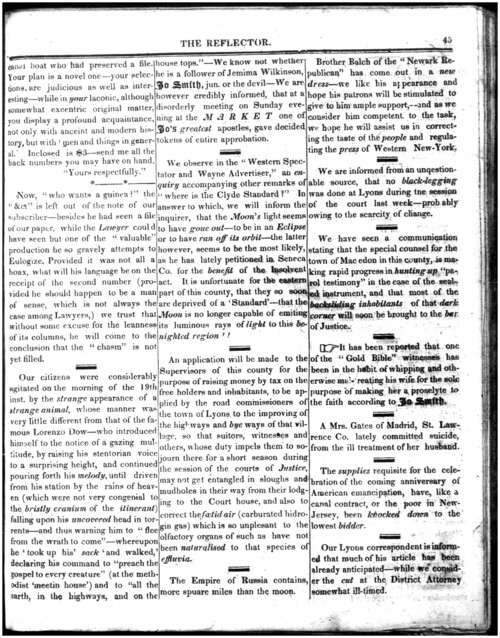 Our citizens were considerably agitated on the morning of the 19th inst. by the strange appearance of a strange animal, whose manner was very little different from that of the famous Lorenzo Dow–who introduced himself to the notice of a gazing multitude, by raising his stentorian voice to a surprising height, and continued pouring forth his melody, until driven from his station by the rains of heaven (which were not very congenial to the bristly cranium of the itinerant) falling upon his uncovered head in torrents–and thus warning him to “flee from the wrath to come”–whereupon he ‘took up his’ sack ’and walked,’ declaring his command to “preach the gospel to every creature” (at the methodist ‘meetin house’) and to ‘all the earth, in the highways, and on the house tops.’–We know not whether he is a follower of Jemima Wilkinson, Jo Smith, jun. or the devil–We are however, credibly informed that at a disorderly meeting on Sunday evening at the M A R K E T one of Jo's greatest apostles, gave decided tokens of entire approbation. . . .

It has been reported that one of the “Gold Bible” witnesses has been in the habit of whipping and otherwise mal-treating his wife for the sole purpose of making her a proselyte to the faith according to Joe Smith. [45] . . .

We have been informed that a “Gold Bible” apostle lately undertook to anathematise an infidel.!!! [46]