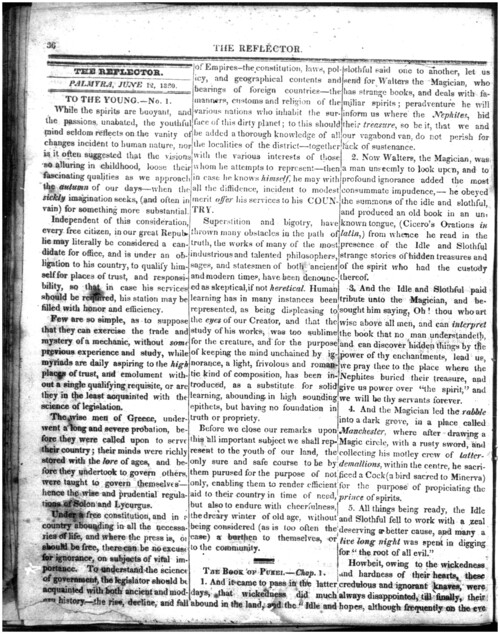 1. And it came to pass in the latter days, that wickedness did much abound in the land, and the “Idle and slothful said one to another, let us send for Walters the Magician, who has strange books, and deals with familiar spirits; peradventure he will inform us where the Nephites, hid their treasure, so be it, that we and our vagabond van, do not perish for lack of sustenance.

2. Now Walters, the Magician, was a man unseemly to look upon, and to profound ignorance added the most consummate impudence,—he obeyed the summons of the idle and slothful, and produced an old book in an unknown tongue, (Cicero's Orations in latin,) from whence he read in the presence of the Idle and Slothful strange stories of hidden treasures and of the spirit who had the custody thereof.

3. And the Idle and Slothful paid tribute unto the Magician, and besought him saying, Oh! thou who art wise above all men, and can interpret the book that no man understandeth, and can discover hidden things by the power of thy enchantments, lead us, we pray thee to the place where the Nephites buried their treasure, and give us power over “the spirit,” and we will be thy servants forever.

4. And the Magician led the rabble into a dark grove, in a place called Manchester, where after drawing a Magic circle, with a rusty sword, and collecting his motley crew of latter-demallions, within the centre, he sacrificed a Cock (a bird sacred to Minerva) for the purpose of propiciating the prince of spirits.

5. All things being ready, the Idle and Slothful fell to work with a zeal deserving a better cause, and many a live long night was spent in digging for “the root of all evil.”

Howbeit, owing to the wickedness and hardness of their hearts, these credulous and ignorant knaves, were always disappointed, till finally, their hopes, although frequently on the eve [36] of consummation–like that of he hypocrite perished, and their hearts became faint within them.

7. And it came to pass, that when the Idle and Slothful became weary of their nightly labors, they said one to another, lo! this imp of the Devil, hath deceived us, let us no more of him, or peradventure, ourselves, our wives, and our little ones, will become chargeable on the town.

8. Now when Walters the Magician heard these things, he was sorely grieved, and said unto himself, lo! mine occupation is gone, even these ignorant vagabonds, the idl eand [idle and] slothful detect mine impostures. I will away and hide myself, lest the strong arm of the law should bring me to justice.

9. And he took his book, and his rusty sword, and his magic stone, and his stuffed Toad, and all his implements of witchcraft and retired to the mountains near Great Sodus Bay, where he holds communion with the Devil, even unto this day.

10. Now the rest of the acts of the magician, how his mantle fell upon the prophet Jo. Smith Jun. and how Jo. made a league with the spirit, who afterwards turned out to be an angel, and how he obtained the “Gold Bible,” Spectacles, and breast plate–will they not be faithfully recorded in the book of Pukei?”