“A fellow by the name of Joseph Smith” 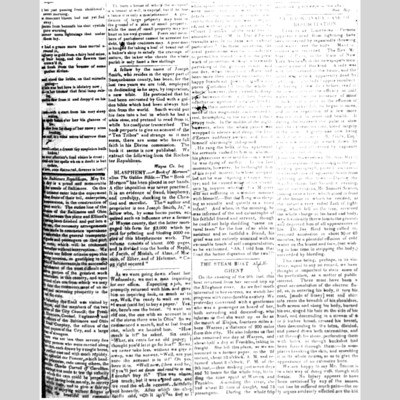 A fellow by the name of Joseph Smith, who resides in the upper part of Susquehanna county, has been, for the last two years we are told, employed in dedicating as he says, by inspiration, a new bible. He pretended that he had been entrusted by God with a golden bible which had been always hidden from the world. Smith would put his face into a hat in which he had a white stone, and pretend to read from it, while his coadjutor transcribed. The book purports to give an account of the “Ten Tribes,” and strange as it may seem, there are some who have full faith in his Divine commission. The book it seems is now published. We extract the following from the Rochester Republican.

BLASPHEMY.—“Book of Mormon” alias The Golden Bible.—The “Book of Mormon” has been placed in our hands. A viler imposition was never practised. It is an evidence of fraud, blasphemy, and credulity, shocking to the Christian and moralist. The “author and proprietor is one Joseph Smith, Jr,” a fellow who, by some hocus pocus, acquired such an influence over a farmer of Wayne county, that the latter mortgaged his farm for $3,000 which he paid for printing and binding 5000 copies of this blasphemous work. The volume consists of about 600 pages, and is divided into the books of Nephi, of Jacob, of Mosiah, of Alma, of Mormon, of Ether, and of Helaman. “Copy right secured.”