When ignorance is bliss 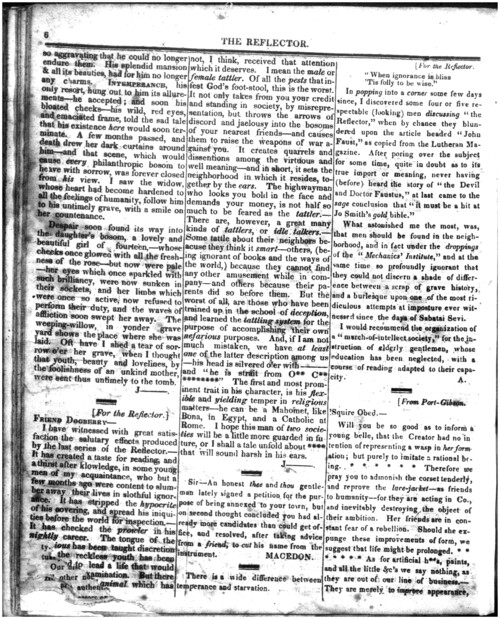 “When ignorance is bliss

In popping into a corner some few days since, I discovered some four or five respectable (looking) men discussing “the Reflector,” when by chance they blundered upon the article headed “John Faust,” as copied from the Lutheran Magazine. After poring over the subject for some time, quite in doubt as to its true import or meaning, never having (before) heard the story of “the Devil and Doctor Faustus,” at last came to the sage conclusion that “it must be a hit at Jo Smith’s gold bible.”

What astonished me the most, was, that men should be found in the neighborhood, and in fact under the droppings of the “Mechanics’ Institute,” and at the same time so profoundly ignorant that they could not discern a shade of difference between a scrap of grave history, and a burlesque upon one of the most ridiculous attempts at imposture ever witnessed since the days of Sabatai Sevi.

I would recommend the organization of a “march-of-intellect-society,” for the instruction of elderly gentlemen, whose education has been neglected, with a course of reading adapted to their capacity. A.