Caution Against the Golden Bible 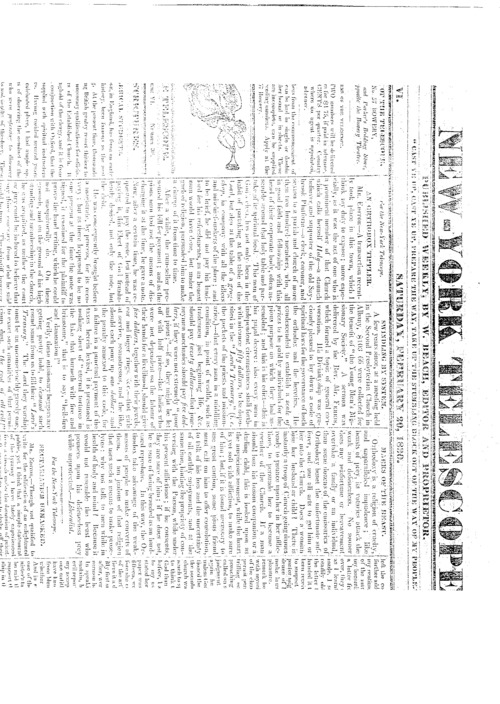 CAUTION AGAINST THE GOLDEN BIBLE.

The editor of the Palmyra Freeman declared in his paper of August 11th, as follows:— “The Golden Bible is the greatest piece of superstition that has ever come within the sphere of our knowledge.”

In the Investigator, No. 12, Dec. 11, I published, by way of caution, a letter of Oliver H.P. Cowdry, in answer to my letter to Joseph Smith, Jun. Martin Harris, and David Whitmore—the believers in said bible of gold plates—which they affirm they have miraculously, or supernaturally beheld. I sought for evidences, and such as could not be disputed, of the existence of this bible of golden plates. But the answer was—the world must take their words for its existence; and that the book would appear this month.

The editor of the Palmyra Freeman, their neighbor, adds to the above, that “in the fall of 1827, Joseph Smith, of Manchester, Ontario county, reported he had been visited in a dream by the spirit of the Almighty, and informed, that in a certain hill, in that town, was deposited this Golden Bible, containing an ancient record of a divine nature and origin. After being thrice visited thus, as he states, he proceeded to the spot, and found the bible, with a huge pair of spectacles. He had been directed, however, not to let any mortal being examine them [i.e. the plates and the stone-eyed spectacles] under no less penalty than instant death!! It was said that the leaven of the bible were plates of gold, about eight inches long, six inches wide, and one-eighth of an inch thick. [i.e. 8 plates are one inch thick, 8 long and 6 wide.] On these plates were characters, or hieroglyphics, engraved.” The whole of the plates are said to weigh about thirty pounds; which would be in gold near eight thousand dollars, beside the value of the engraving.

One of Joseph Smith’s proselytes, is, continues the Palmyra Freeman, “Martin Harris, an honest and industrious farmer of Palmyra.” He is said to have shown some of these characters to Professor Samuel L. Mitchell, of this city, who could not translate them. Martin Harris returned, and set Joseph Smith to the business of translating them: who, “by placing the spectacles in a hat and looking into them, Joseph Smith said he could interpret these characters.”

The editor of the Palmyra Freeman describes Joseph Smith as not being very literate: and that his translation is pronounced, “by his proselytes, to be superior in style, and more advantageous to mankind than our holy bible! ”

I have this month received sixteen pages of this work, from page 353 to 368 inclusive. I cannot perceive any superiority of style in this specimen; nor any evidence that this bible is not a book of Joseph Smith’s own manufacture. His title page professed that he was the author of it; and this declaration is evidenced by its style. For in these sixteen pages, I noticed ` yea’ was repeated 34 times; and even 21 times in two pages. The words, ` It came to pass,’ is repeated 56 times in 16 pages, and even ten times on one page. ` Now’ and ` behold,’ are reiterated near the commencement of sentences, full thirty times apiece, and more, in these sixteen pages. Consequently these four things are repeated 162 times on the ear-drum, while speaking of the war of the Nephites and Lemanites, in the day of Moroni, and reign of the judges, according to the Book of Alma.

Thus, in page 359, it is written—“Yea, verily, verily, I say unto you, if all men had been, and were, and ever would be, like unto Moroni— yea, the devil would never have no power over the hearts of the children of men: [ neve r to have no power, is ever to have some power.] Behold, he was a man like unto Ammon, the son of Mosiah; yea, and even the other sons of Mosiah; yea, and also, Alma and his sons.” Whether this style is equal to our scripture style, the reader can judge.

Again, in pages 353 & 4, it reads thus: “And those who died in the faith of Christ are happy in him, as we must needs suppose.” That a weak faith ends this sentence, is manifest.

Again, page 353, is written—“And there was but few which denied the covenant of freedom.” Was should have been were.—Again: “And there were some who died with fevers, which at some seasons of the year, was [were] very frequent.

Again, in the next page—“And it came to pass that they would not, or the MORE part, would not obey,” &c. The following is the title page of the Golden Bible, as published in the Palmyra Freeman:—

“The Book of Mormon, an account, written by the hand of Mormon upon plates, taken from the plates of Nephi:–

“Wherefore it is an abridgment of the record of the people of Nephi, and also of the Lamanites, written to the Lamanites, which are a remnant of the house of Israel: and also to Jew and Gentile; written by way of commandment, and also by the spirit of prophecy and of revelation; written and sealed and hid up unto the Lord, that they might not be destroyed.–to come forth by the gift and power of God unto the interpretation thereof–sealed up by the hand of Moroni, and hid up unto the Lord, to come forth in due time by way of the Gentile—the interpretation thereof by the gift of God: an abridgment taken from the book of Ether.

“Also, which is a record of the people of Jared, which were scattered at the time the Lord confounded the language of the people, when they were building a tower to get to Heaven; which is to shew unto the remnant of the house of Israel how great things the Lord hath done for their fathers: and that they may know the covenants of the Lord, that they are not cast off forever: and also to the convincing of the Jew and Gentile that Jesus is the Christ, the Eternal God, manifesting himself unto all nations. And now, if there by fault, it be the mistake of men: wherefore condemn not the things of God, that ye may be found spotless at the judgment seat of Christ.—By JOSEPH SMITH, Junior, Author and Proprietor.”

“Also which is a record of the people of Jared, &c. to teach Jew and Gentile, that Jesus is the Christ, the Eternal God.” But lastly, Joseph Smith, jun. declares he is the author of this book of Mormon, this record of Nephi, this book of Ether, this record of Jared’s people, who were scattered at the building of the tower of Babel; this convincing work, which is to convert Jew and Gentile to believe that Jesus is the eternal God. Surely our missionaries should take notice of this! “Now if there be fault, it be the mistake of men,” says J.S.

This title page is another specimen of superior style, in which one is soon lost— and wonders what J. Smith means; or how can all that is written by the author be true!

These facts are given to caution people not to spend their money uselessly for a book, that is more probable a hoax—or a money-making speculation—or an enthusiastic delusion, than a revelation of facts by the Almighty.