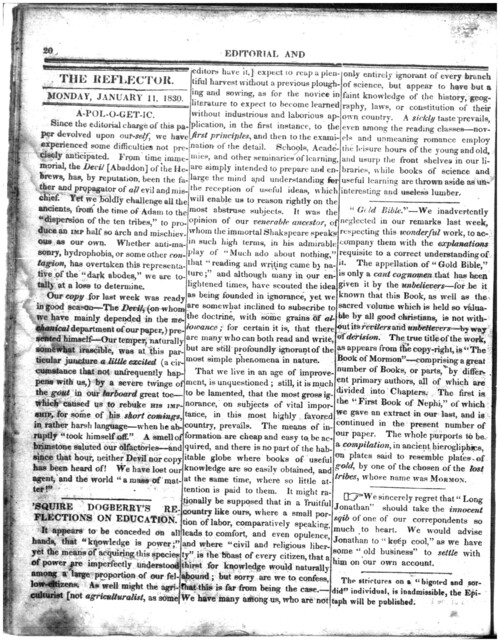 “Gold Bible.”—We inadvertently neglected in our remarks last week, respecting this wonderful work, to accompany them with the explanations requisite to, correct understanding of it. The appellation of “Gold Bible,” is only a cant cognomen that has been given it by the unbelievers—for be it known that this Book, as well as the sacred volume which is held so valuable by all good christians, is not without its revilers and unbelievers—by way of derision.

The true title of the work, as appears from the copy-right, is “The Book of Mormon,”— comprising a great number of Books, or parts, by different primary authors, all of which are divided into Chapters. The first is “First Book of Nephi,” of which we gave an extract in our last, and is continued in the present number of our paper. The whole purports to be a compilation, in ancient hierogliphics, on plates said to resemble plates of gold, by one of the chosen of the lost tribes, whose name was MORMON.