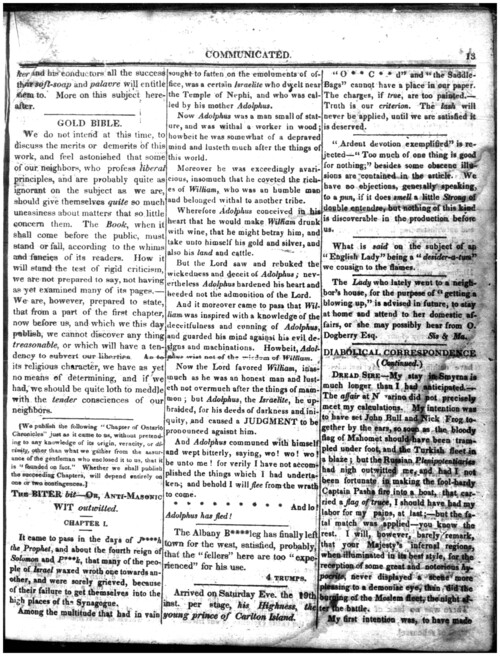 [We publish the following “Chapter of Ontario Chronicles” just as it came to us, without pretending to any knowledge of its origin, veracity, or divinity, other than what we gather from the assurance of the gentleman who enclosed it to us, that it is “founded on fact.” Whether we shall publish the succeeding Chapters, will depend entirely on one or two contingences.]

It came to pass in the days of J****h the Prophet, and about the fourth reign of Solomon and P***k, that many of the people of Israel waxed wroth one towards another, and were sorely grieved, because of their failure to get themselves into the high places of the Synagogue.

Among the multitude that has in vain sought to fatten on the emoluments of office, was a certain Israelite who dwelt near the Temple of Nephi, and who was called by his mother Adolphus.

Now Adolphus was a man small of stature, and was withal a worker in wood; howbeit he was somewhat of a depraved mind and lusteth much after the things of this world.

Moreover he was exceedingly avaricious, insomuch that he coveted the riches if William, who was a humble man and belonged withal to another tribe.

Wherefore Adolphus conceived in his heart that he would make William drunk with wine, that he might betray him, and take unto himself his gold and silver, and also his land and cattle.

But the Lord saw and rebuked the wickedness and deceit of Adolphus; nevertheless Adolphus hardened his heart and heeded not the admonition of the Lord.

And it moreover came to pass that William was inspired with a knowledge of the deceitfulness of and cunning of Adolphus, and guarded his mind against his evil designs and machinations. Howbeit, Adolphus wist not the wisdom of William.

Now the Lord favored William, inasmuch as he was an honest man and lusteth not overmuch after the things of mammon; but Adolphus, the Israelite, he upbraided, for his deeds of darkness and iniquity, and caused a JUDGMENT to be pronounced against him.

And Adolphus communed with himself and wept bitterly, saying, wo! Wo! Wo! Be unto me! For verily I have not accomplished the things which I had undertaken; and behold I will flee from the wrath to come.