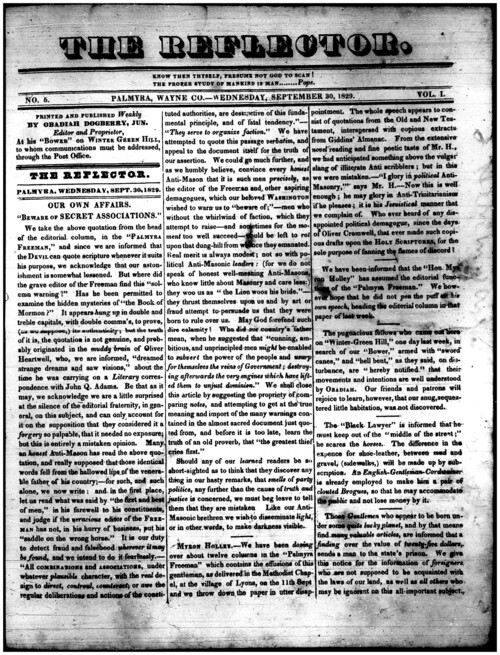 We take the above quotation from the head of the editorial column, in the “PALMYRA FREEMAN,” and since we are informed that the DEVIL can quote scripture whenever it suits his purpose, we acknowledge that our astonishment is somewhat lessened. But where did the grave editor of the Freeman find this “solemn warning?” Has he been permitted to examine the hidden mysteries of “the Book of Mormon?” It appears hung up in double and treble capitals, with double comma’s, to prove, (as we suppose, ) its authenticity; but the truth of it is, the quotation is not genuine, and probably originated in the muddy brain of Oliver Heartwell, who, we are informed, “dreamed strange dreams and saw visions,” about the time he was carrying on a

Literary correspondence with John Q. Adams. Be that as it may, we acknowledge we are a little surprised at the silence of the editorial fraternity, in general, on this subject, and can only account for it on the supposition that they considered it a forgery so palpable, that it needed no exposure; but this is entirely a mistaken opinion. Many an honest Anti-Mason has read the above quotation, and really supposed that those identical words fell from the hallowed lips of the venerable father of his country;—for such, and such alone, we now write: and in the first place, let us read what was said by “the first and best of men,” in his farewell to his constituents, and judge if the veracious editor of the FREEMAN has not, in his hurry of business, put his “saddle on the wrong horse.” It is our duty to detect fraud and falsehood wherever it may be found, and we intend to do it fearlessly.— “All COMBINATIONS and ASSOCIATIONS, under whatever plausible character, with the real design to direct, controul, counteract, or awe the regular deliberations and actions of the constituted authorities, are destructive of this fundamental principle, and of fatal tendency.”— “They serve to organize faction.” We have attempted to quote this passage verbatim, and appeal to the document itself for the truth of our assertion. We could go much further, and as we humbly believe, convince every honest Anti-Mason that it is such men precisely, as the editor of the Freeman and other aspiring demagogues, which our beloved WASHINGTON wished to warn us to “beware of;”—men who without the whirlwind of faction, which they attempt to raise—and sometimes for the moment too well succeed—would be left to rot upon that dung-hill from whence they emanated. Real merit is always modest; not so with political Anti-Masonic leaders: (for we do not speak of honest well-meaning Anti-Masons, who know little about Masonry and care less:) they woo us as “the Lion woos his bride.”—they thrust themselves upon us and by art or fraud attempt to persuade us that they were born to rule over us.

May God forefend such dire calamity! Who did our country’s father mean, when he suggested that “cunning, ambitious, and unprincipled men might be enabled to subvert the power of the people and usurp for themselves the reins of Government; destroying afterwards the very engines which have lifted them to unjust dominion.” We shall close this article by suggesting the propriety of comparing notes, and attempting to get at the true meaning and import of the many warnings contained in the almost sacred document just quoted from, and before it is too late, learn the truth of an old proverb, that “the greatest thief cries first.”

Should any of our learned readers be so short-sighted as to think that they discover any thing in our hasty remarks, that smells of party politics, any further than the cause of truth and justice is concerned, we must beg leave to tell them that they are mistaken. Like our Anti-Masonic brethren we wish to disseminate light, or in other words, to make darkness visible.