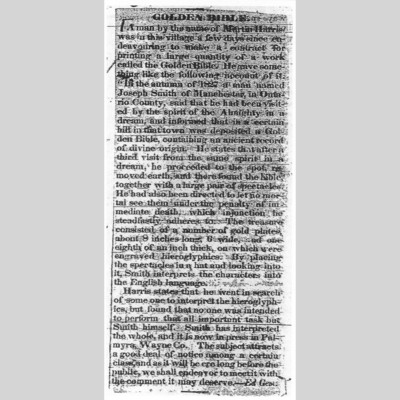 A man by the name of Martin Harris was in this village a few days since endeavouring to make a contract for printing a large quantity of a work called the Golden Bible. He gave something like the following account of it.

“In the autumn of 1827 a man named Joseph Smith of Manchester, in Ontario County, said that he had been visited by the spirit of the Almighty in a dream, and informed that in a certain hill in that town was deposited a Golden Bible, containing an ancient record of divine origin. He states that after the third visit from the same spirit in a dream he proceeded to the spot, removed earth, and there found the bible, together with a large pair of spectacles. He had also been directed to let no mortal see them under the penalty of immediate death, which injunction he steadfastly adheres to. The treasure consisted of a number of gold plates, about 8 inches long, 6 wide, and one eighth of an inch thick, on which were engraved hieroglyphics. By placing the spectacles in a hat and looking into it, Smith interprets the characters into the English language.[”]

Harris states that he went in search of some one to interpret the hieroglyphics, but found that no one was intended to perform that all important task but Smith himself. Smith has interpreted the whole, and it is now in press in Palmyra, Wayne Co. The subject attracts a good deal of notice among a certain class, and as it will be ere long before the public, we shall endeavor to meet it with the comment it may deserve.— Ed. Gem.