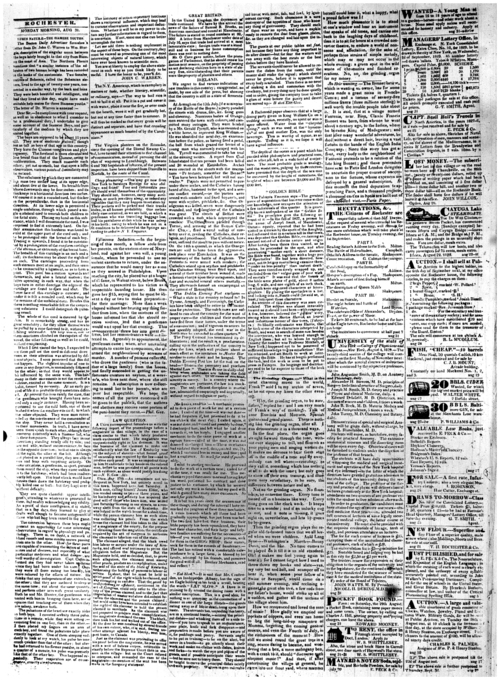 The Palmyra Freeman says—The greatest piece of superstition that has ever come within our knowledge, now occupies the attention of a few individuals of this quarter. It is generally known and spoken of as the “Golden Bible.” Its proselytes give the following account of it In the fall of 1827, a person by the name of Joseph Smith, of Manchester, Ontario county, reported that he had been visited in a dream by the spirit of the Amighty and informed that in a certain hill in that town, was deposited this Golden Bible, containing an ancient record of a divine nature and origin After having been thrice thus visited, as he states, he proceeded to the spot, and after penetrating “mother earth” a short distance, the Bible was found, together with a huge pair of spectacles! He had been directed, however, not to let any mortal being examine them, “under no less penalty” than instant death! They were therefore nicely wrapped up and excluded from the “vulgar gaze of poor wicked mortals!” It was said that the leaves of the bible were plates of gold, about 8 inches long, 6 wide, and one eighth of an inch thick, on which were engraved characters or hyeroglyphics. By placing the spectacles in a hat, and looking into it, Smith could (he said so, at least,) interpret these characters.

An account of this discovery was soon circulated. The subject was almost invariably treated as it should have been—with contempt. A few, however, believed the “golden” story, among whom was Martin Harris, an honest and industrious farmer of this town, (Palmyra). So blindly enthusiastic was Harris, that he took some of the characters interpreted by Smith, and went in search of some one besides the interpreter, who was learned enough to English them; but all to whom he applied (among the number was Professor Mitchell, of New York) happened not to be possessed of sufficient knowledge to give satisfaction! Harris returned, and set Smith to work at interpreting the Bible. He has at length performed the task, and the work is soon to be put to press in Palmyra. Its language and doctrine are said to be far superior to those of the book of life!!!