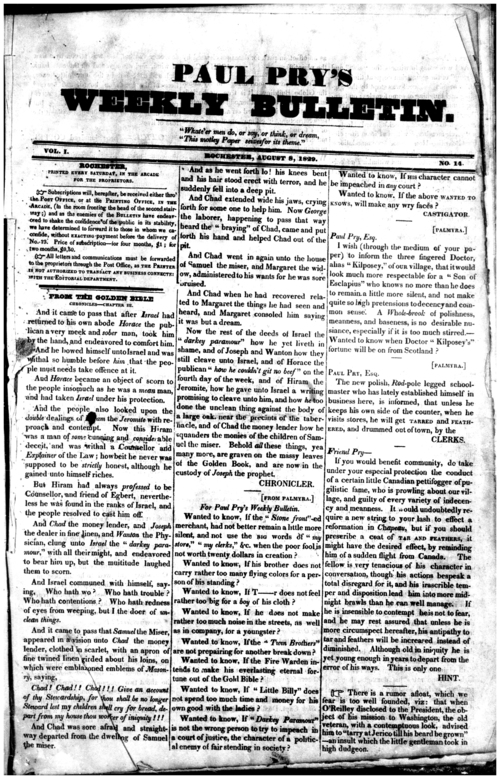 FROM THE GOLDEN BIBLE

And it came to pass that after Israel had returned to his own abode Horace the publican a very meek and sober man, took him by the hand, and endeavored to comfort him.

And he bowed himself unto Israel and was withal so humble before him that the people must needs take offence at it.

And Horace became an object of scorn to the people insomuch as he was a mean man who had taken Israel under his protection.

And the people also looked upon the double dealings of Hiram the Jeromite with reproach and contempt. Now this Hiram was a man of some cunning and consider able deceit, and was withal a Counsellor and Explainer of the Law; howbeit he never was supposed to be strictly honest, although he gained unto himself riches.

But Hiram had always professed to be Counsellor, and friend of Egbert, nevertheless he was found in the ranks of Israel, and the people resolved to cast him off.

And Chad the money lender, and Joseph the dealer in fine linen, and Wanton the physician, clung unto Israel the “darkey paramour,” with all their might, and endeavored to bear him up, but the multitude laughed them to scorn.

And Israel communed with himself, saying, Who hath wo? Who hath trouble? Who hath contentions? Who hath redness of eyes from weeping, but I the doer of unclean things.

And it came to pass that Samuel the Miser, appeared in a vision unto Chad the money lender, clothed in scarlet, with an apron of fine twined linen girded about his loins, on which were emblazoned the emblems of Masonry, saying,

Chad! Chad!! Chad!!! Give an account of thy Stewardship, for thou shall be no longer Steward lest my children shall cry for bread, depart from my house thou worker of iniquity!!!

And Chad was sore afraid and straightway departed from the dwelling of Samuel the miser.

And as he went forth lo! his knees bent and his hair stood erect with terror, and he suddenly fell into a deep pit.

And Chad extended wide his jaws, crying forth for some one to help him. Now George the laborer, happening to pass that way heard the “braying” of Chad, came and put forth his hand and helped Chad out of the pit.

And Chad went in again unto the house of Samuel the miser, and Margaret the widow, administered to his wants for he was sore bruised.

And Chad when he had recovered related to Margaret the things he had seen and heard, and Margaret consoled him saying it was but a dream.

Now the rest of the deeds of Israel the “darkey paramour” how he yet liveth in shame, and of Joseph and Wanton how they still cleave unto Israel, and of Horace the publican “how he couldn't git no beef” on the fourth day of the week, and of Hiram the Jeromite, how he gave unto Israel a writing promising to cleave unto him, and how he too done the unclean thing against the body of a large oak, near the precincts of the tabernacle, and of Chad the money lender how he squanders the monies of the children of Samuel the miser. Behold all these things, yea many more, are graven on the massy leaves of the Golden Book, and are now in the custody of Joseph the prophet.