From the Golden Bible. Chronicles–Chapter 1 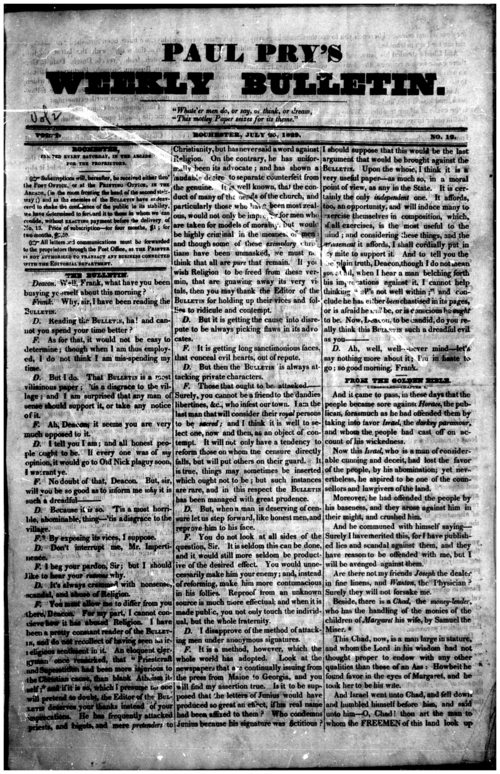 FROM THE GOLDEN BIBLE.

And it came to pass, in these days that the people became sore against Horace, the publican, forasmuch as he had offended them by taking into favor Israel, the darkey paramour, and whom the people had cast off on account of his wickedness.

Now this Israel, who is a man of considerable cunning and deceit, had lost the favor of the people, by his abomination; yet nevertheless, he aspired to be one of the counsellors and lawgivers of the land.

Moreover, he had offended the people by his baseness, and they arose against him in their might and crushed him.

And he communed with himself saying—Surely I have merited this, for I have published lies and scandal against them, and they have reason to be offended with me, but I will be avenged against them.

Are there not my friends Joseph the dealer in fine linens, and Wanton, the Physician?

Surely they will not forsake me.

Beside, there is a Chad, the money-lender, who has the handling of the monies of the children of Margaret his wife, by Samuel the Miser.

This Chad, now, is a man large in stature, and whom the Lord in his wisdom had not thought proper to endow with any other qualities than those of an Ass: Howbeit he found favor in the eyes of Margaret, and he took her to be his wife.

And Israel went unto Chad, and fell down and humbled himself before him, and said unto him—O Chad! thou art the man to whom the FREEMEN of this land look up [1] for counsel and advice; I beseech you to assist me for I am in trouble.

And Chad extended his jaws, and behold there came forth a noise as the braying of an ass; and he said, Arise, Israel, and relate to me the cause of thy troubles, And Israel arose and fell upon Chad’s neck, and kissed him, and said, My ambition is the cause of all my trouble. Were it not that in order to secure my end, I have abused, villified, and slandered the people, might I not have now been respected?

But did not they first give me cause, by publishing dark TRUTHS about me, which cut me to the heart sore, and spurred and gored me on? And have they not put me down, and as a vile worm trodden me under foot?

And Chad once more extended his jaws, and said—Yea, all these things are true; thou hast slandered the people, and your trouble is merited; but I will endeavor to bear thee up against them.

Moreover we will cry persecution, & will endeavor to varnish and build up your dark character by destroying that of some of your alleged persecutors.

And Israel went out from the presence of Chad, well pleased; and he lifted up his eyes and beheld Joseph and Wanton afar off, coming towards him.

And he thought unto himself—Verily, I am injuring them by sojourning in this land, and he avoided them, for their sight troubled him.

And he went unto his abode, and wept bitterly.