“Just about in this particular region” 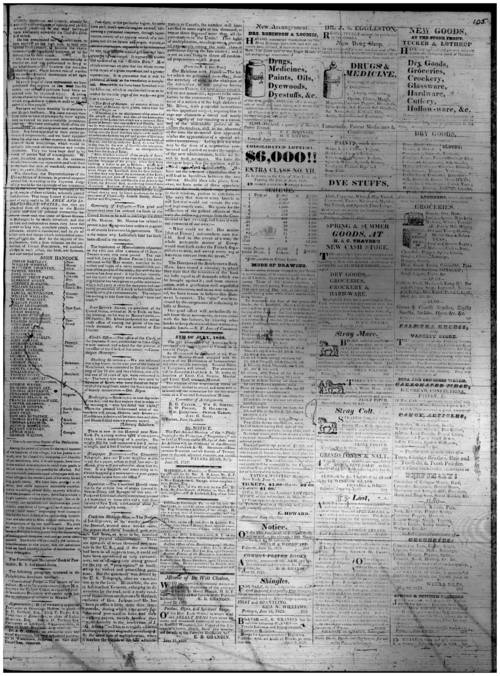 Just about in this particular region, for some time past, much speculation has existed, concerning a pretended discovery, through superhuman means, of an ancient record, of a religious and a divine nature and origin, written in ancient characters, impossible to be interpreted by any to whom the special gift has not been imparted by inspiration. It is generally known and spoken of as the “Golden Bible.” Most people entertain an idea that the whole matter is the result of a gross imposition and a grosser superstition. It is pretended that it will be published as soon as the translation is completed. Meanwhile we have been furnished with the following, which is represented to us as intended for the title page of the work—we give it as a curiosity:—

“The Book of Mormon, an account, written by the hand of Mormon upon plates, taken from the plates of Nephi—

“Wherefore it is an abridgment of the record of the people of Nephi, and also of the Lamanites, written to the Lamanites, which are a remnant of the house of Israel: and also to Jew and Gentile; written by way of commandment, and also by the spirit of prophecy and of revelation; written and sealed and hid up unto the Lord, that they might not be destroyed.—to come forth by the gift and power of God unto the interpretation thereof—sealed up by the hand of Moroni, and hid up unto the Lord, to come forth in due time by way of the Gentile—the interpretation thereof by the gift of God: an abridgment taken from the book of Ether.

“Also, which is a record of the people of Jared, which were scattered at the time the Lord confounded the language of the people, when they were building a tower to get to Heaven; which is to shew unto the remnant of the house of Israel how great things the Lord hath done for their fathers: and that they may know the covenants of the Lord, that they are not cast off forever: and also to the convincing of the Jew and Gentile that Jesus is the Christ, the Eternal God, manifesting himself unto all nations. And now, if there by fault, it be the mistake of men: wherefore condemn not the things of God, that ye may be found spotless at the judgment seat of Christ.—By JOSEPH SMITH, Junior, Author and Proprietor”